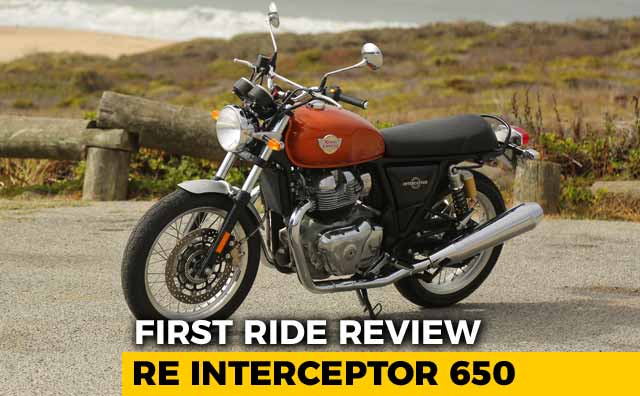 The Interceptor 650 carrying a roadster design and The bikes uses the same dual-cradle, tubular steel frame which has been designed and developed by Harris Performance.

The Royal Enfield 650 Twins are based on the brand new 649 cc, air and oil cooled, parallel-twin engine that belts out 47 bhp at 7250 rpm and 52 Nm of peak torque at 5250 rpm. About 80 per cent of the torque is available from 2500 rpm and a flat torque curve results in ample power all thee way till about 6000 rpm. Sending power to the rear wheels is a 6-speed gearbox that comes with a slipper clutch, for a lighter lever operation. The bikes are capable of speeds in excess of 160 kmph.

The Royal Enfield Continental GT 650 and the Interceptor 650 will come with the conventional 41 mm telescopic front forks and twin shock absorbers for the rear suspension. Braking will be handled by a 320 mm disc at the front and a 240 mm disc at the rear. Both bikes will come with dual-channel ABS as standard. The bikes will also ride on large 18-inch wheels wire-spoked wheels.

An integral part of the RE-verse in today's times, both new offerings will come with a host of additional gear on offer. This includes apparel, accessories, merchandise, motorcycle safety gear and more. Royal Enfield will not only sell you the motorcycle but a lifestyle around it that you can flaunt in more ways than you think.