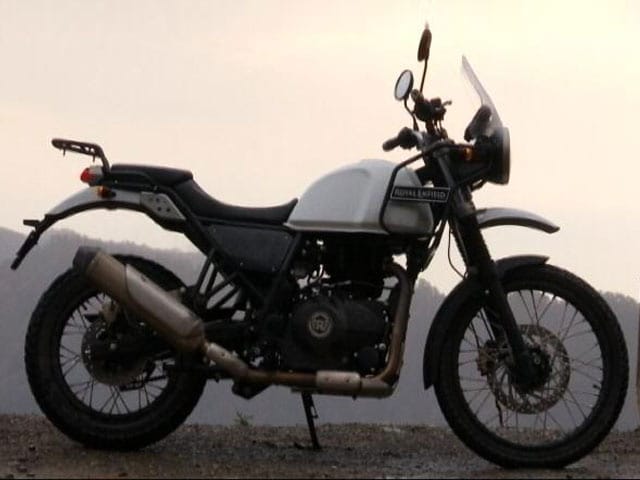 Adding some excitement to the entry-level adventure tourer, Royal Enfield has launched the new Himalayan Sleet Edition in the country. The new Royal Enfield Himalayan Sleet edition is essentially the same model with the camouflage paint job we showed you recently and is priced at Rs 2,12,666 (on-road, Chennai). The new Himalayan Sleet edition has production limited to just 500 units and will be available exclusively online for bookings with a token amount of Rs 5000. Prospective customers will need to register online for purchasing the Sleet edition beginning January 12 till January 30, 2017. The sale will go live on January 30 and will be on a first come-first serve basis.

The adventure tourer from Royal Enfield has been built to take on the rough routes with ease. In terms of design, it is crafted in typical Royal Enfield style; yet there is a sense of uniqueness that segregates it from the usual Royal Enfield bikes around. There is enough storage space for carrying stuff while on the go. With Himalayan, Royal Enfield has tapped into the affordable off-roader segment. Weighing 191 kgs (kerb weight), the bike comes with a fuel tank capacitating 15 liters. The ground clearance is impressive at 220mm and the adventure tourer also gets a carburetor. Suspension duties are carried out by telescopic forks in front and monoshock absorbers at the rear, this makes Himalayan the first Royal Enfield to feature mono-shock suspension. The 411cc version isn’t BSIV compliant; the company will, however, roll out BSIV compliant version by April next year.

The first look at this new RE may not fascinate you, but as you get behind the handle bar you realise how the lean look works well for the performance. Weighing around 191 kg, the bike gets a 15 litres of fuel tank. The instrument cluster which even features a compass is large and easily readable. Front gets a windscreen which is quite helpful during rides but the head lamp comes bereft of daytime running lights. Seat is positioned a tad low which allows planting feet on ground easily.

Power generation will be done by the 411cc, single cylinder, air-cooled engine with overhead cams belting out top power and torque of 24.5bhp at 6500rpm and peak torque of 32Nm to 4250rpm. It is to be noted here that the engine is not BSIV compliant, although a BSIV compliant version is on cards. Transmission duties are handled by a five-speed gearbox. The powertrain will come devoid of the push-rod architecture; instead it features overhead cams. This means that the engine does not require tappet adjustment; in fact the engine is free revving offering increased power band (than any of models from RE) resulting in enhanced performance.

Braking power is delivered by disc unit up front, which is quite robust even on the hilly roads. Considering that RE Himalayan is an adventurer tourer, the braking power is quite vigor providing the required dint to retard speed with ease. Handling is another pro in the bike, the new chassis gives it strength to stay composed on irregular surface.

The multiple spoke 21 inch tyre in front and 17 inch tyre at rear not just offer good grip on road but they also aid towards maintaining balance and stability while on the move.

The new adventure tourer from Royal Enfield will go up against the likes of Mahindra Mojo in its segment.