The new Audi A8 L has come to India over a couple of years after its global debut and is trying to make an impression with it aesthetic and futuristic design along with all the luxury and cutting-edge technology it pack-in. View Photos
The all-new Audi A8 L has been launched in India as a completely built unit (CBU).

The new-generation Audi A8 L has taken a really long time coming to our shores. It was over two years ago Siddharth saw this new flagship sedan in the flesh at Audi's global summit in Barcelona, and then Ameya got his hands on it in Spain. The car was to arrive in India last year itself and the idea has always been to up the ante with all the cutting-edge technology, making it in-sync with Audi's vorsprung durch technik tagline. So let's start with where the owners will spend most of their time in this limousine of a sedan. 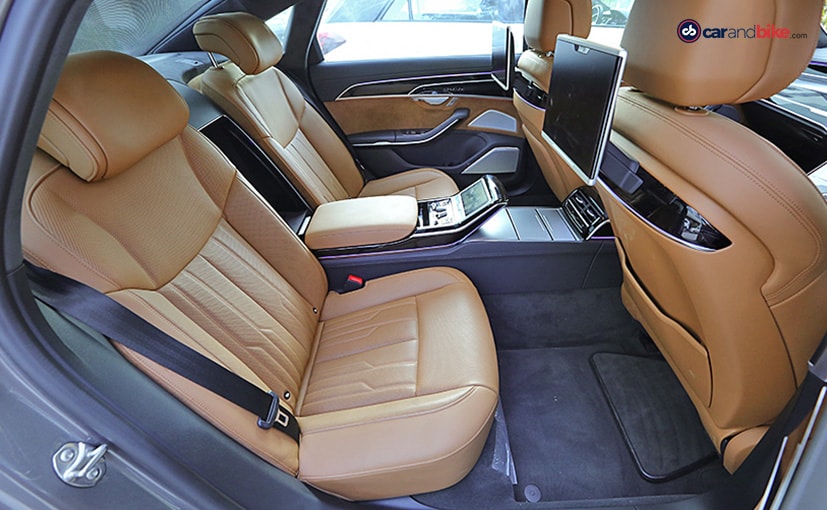 The 3128 mm long wheelbase has translated into 130 mm more legroom inside the cabin.

It's absolutely cavernous in space terms, the Audi A8 L. India gets only the range-topping long wheelbase model which is 5302 mm long, offering a stretched wheelbase of a good 3128 mm. In fact, the A8 L is now 32 mm longer and 13 mm taller than the one it succeeds and that has translated into 130 mm more legroom inside the cabin. And boy! That kind of takes your breath away. 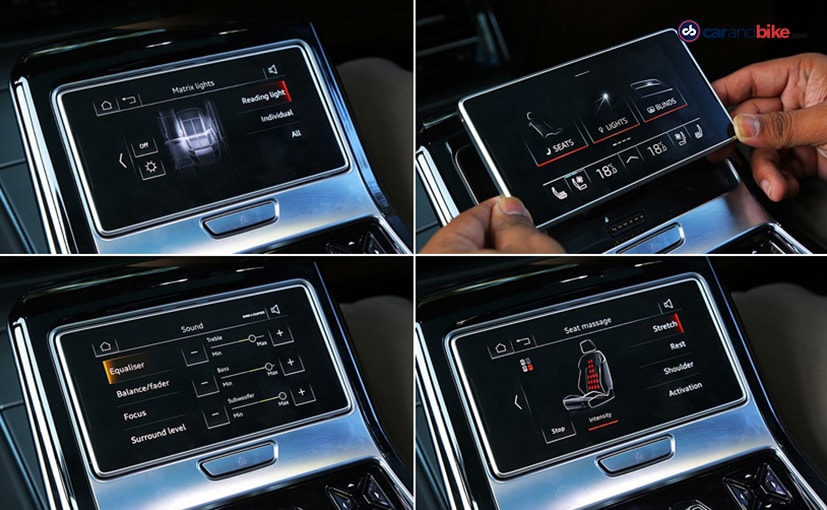 There is also a whole bunch of screens around you for multimedia and other features.

The car simply charms you with plenty of party pieces. It can also double up as your mobile office where you can even video conference via the fully connected Android Tablet placed right in front of these loungers at the rear and the 19-speakers Bang & Olufsen sound system amazes with its acoustic credentials, whether you're conferencing or listening to your favourite playlist. There is also a whole bunch of screens around you, obviously both at the front and rear. 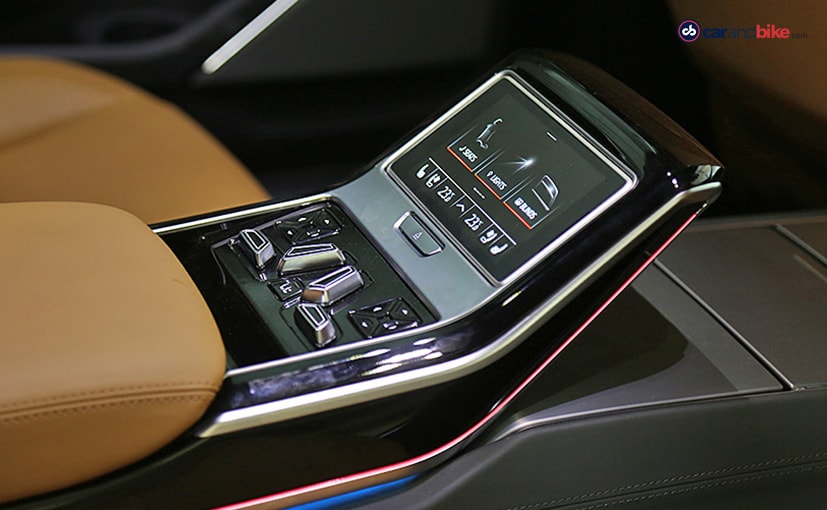 The centre tablet at the rear gives access to every comfort creature and there is quite a lot.

The small tablet integrated into the rear central console lets you carry out all the adjustments that you need. So everything, the Blinds, seat adjustments, media and online streaming, ambient lighting, air ionization and even maps among others, all can be accessed by this one screen. Every time you don't need to use the manual power controls which I still feel are easier to use offering one touch operation. 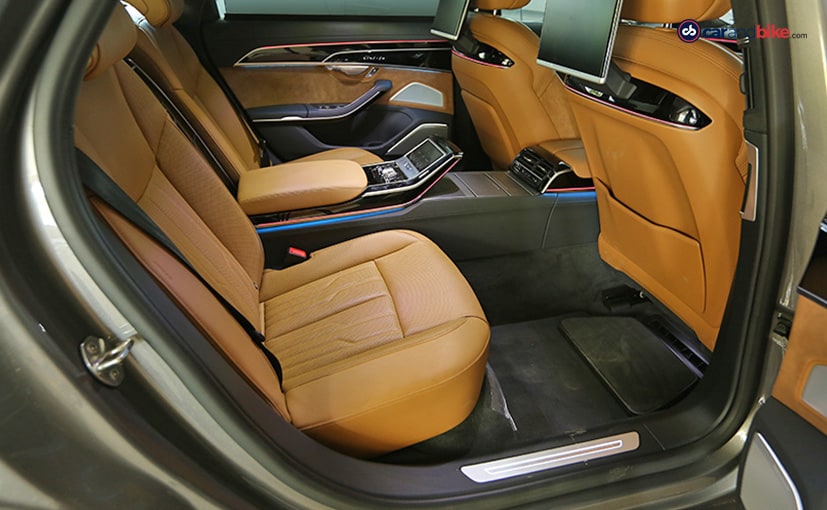 The rear is a perfect lounge to relax on the way back after a hectic day at work.

So after a hectic day at work, you can simply choose from the wide range of ambient lighting and air fragrance options, stretch out on these individual reclining seats, switch on the massage, stream videos online on these Android screens and peacefully enjoy your own company. But these are things that we've seen on so many of these luxury cars. To my interest, there is always that one little gimmick that catches my eye. The Audi A8 L is loaded to its gills with premium features and matrix LED interior lighting are a segment first.

Nope! Don't guess it, it's not even the little refrigerator integrated in the boot because we have seen that too. It's the matrix lights option that has been extended to the interior reading lights and that's a segment first. They are matrix LEDs which is individually stacked on the roof, so everything lits up with a single button or you can individually position where you want that beam of light to fall. So say you want to read something, you can go ahead and do it without even bothering your spouse sitting next to you, quite a relief, isn't it! 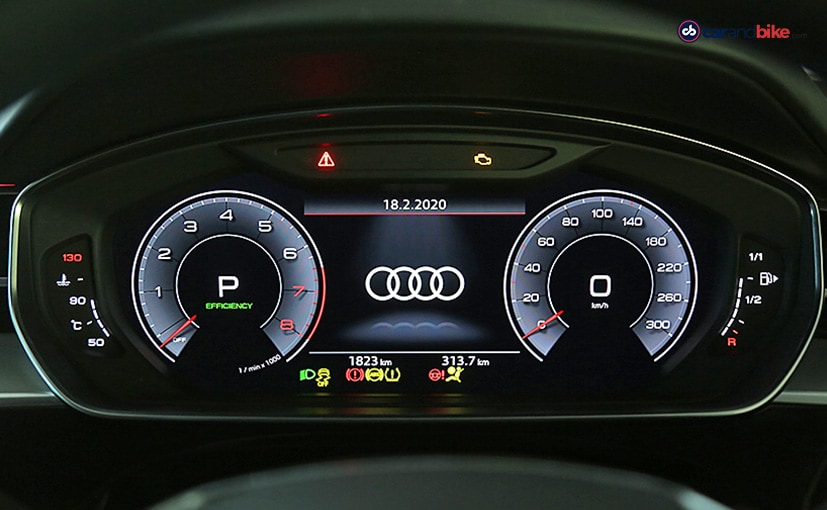 Colour themes on the virtual cockpit look sober than other Audi. 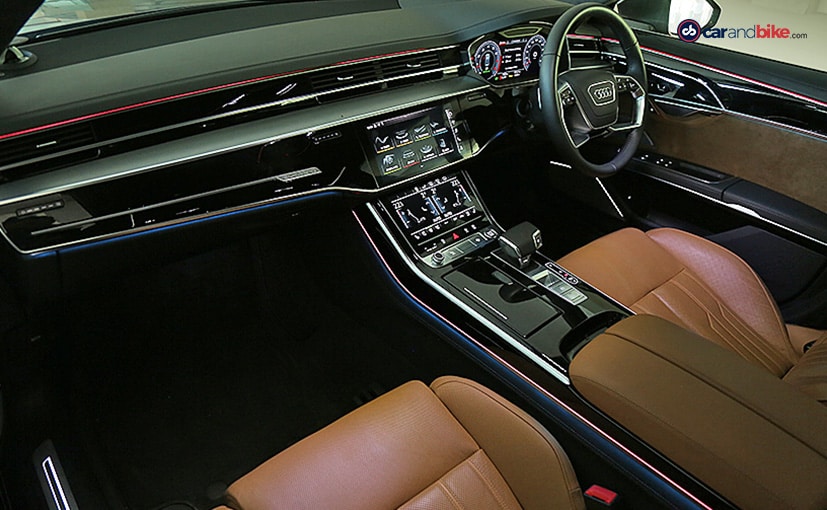 The premium appeal and flush finish is extended even to the front.and the cabin feels plush draped in this valcano leather upholstery.

The cabin feels plush draped in the valcano leather upholstery our test car had, while owners have the choice to personalise their space with 9 leather trim options and 5 inlay trims to select from. The premium appeal and flush finish is extended even to the front where the MMI dual touchscreen setup is seamlessly integrated into the glossy piano black plank that runs across the central console. 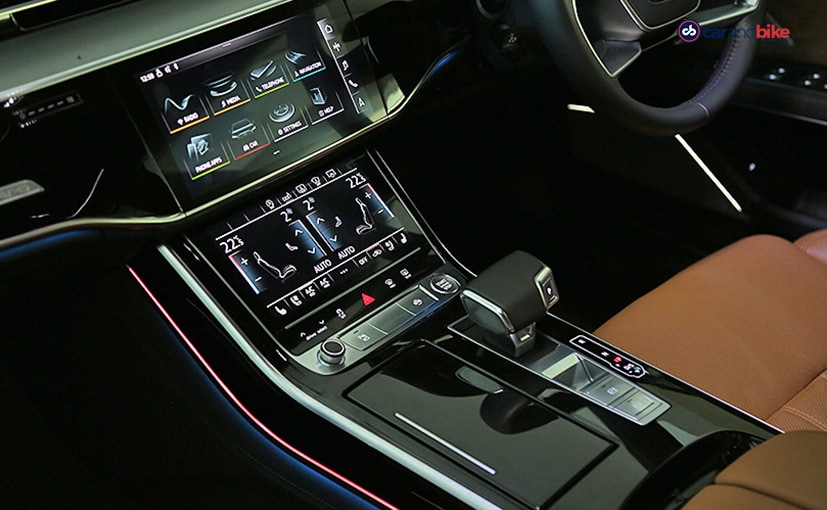 The dual MMI touchscreens replace most of the physical buttons and offer haptik feedback.

The dual touchscreens also replace most of the physical buttons inside, looking quite aesthetic and futuristic. Both screens work just like any other tablet, offering haptik feedback and even pinch operation for maps to zoom in and out. 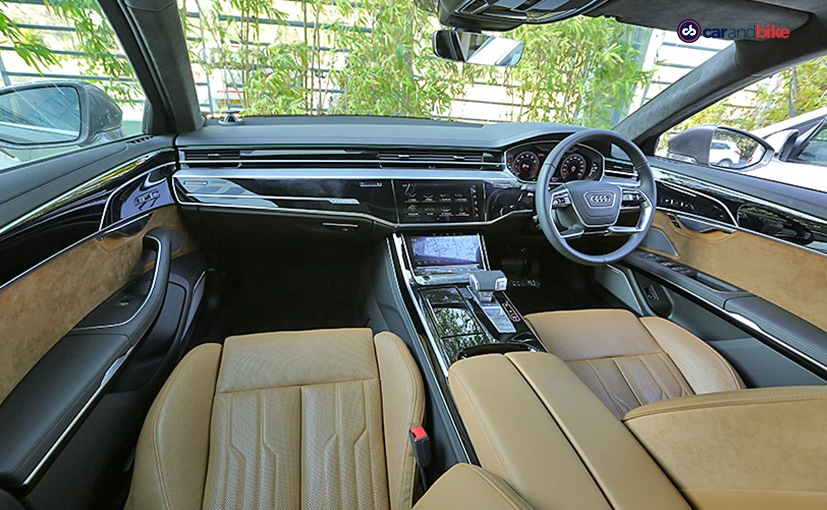 There are also physical buttons for features like seat massage activation, drive select mode and volume control among others ensuring that driver's focus on the road.

While the top unit caters to all your infotainment needs, the bottom unit gives access to all other sorts of creature comforts like four-zone climate control, seat ventilation, massage function and so on. There are a bunch of physical buttons as well for volume adjustments, drive select modes and one-touch seat massage activation among others to ensure your eyes remain on the road while driving. 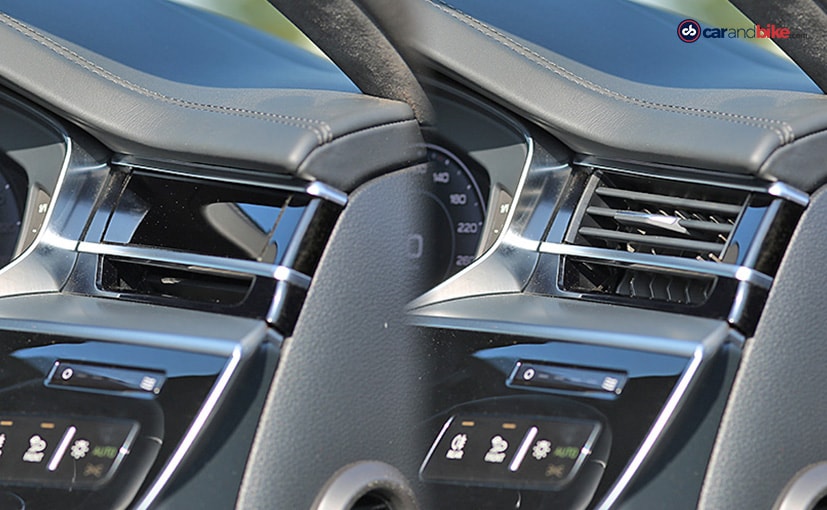 The pop-open air con vents shutting down automatically when you exit.

And when you step out of the car and everything is shut down, the whole dash appears to be a single unit with the pop-open air con vents shutting down automatically when you exit.

What About The Looks 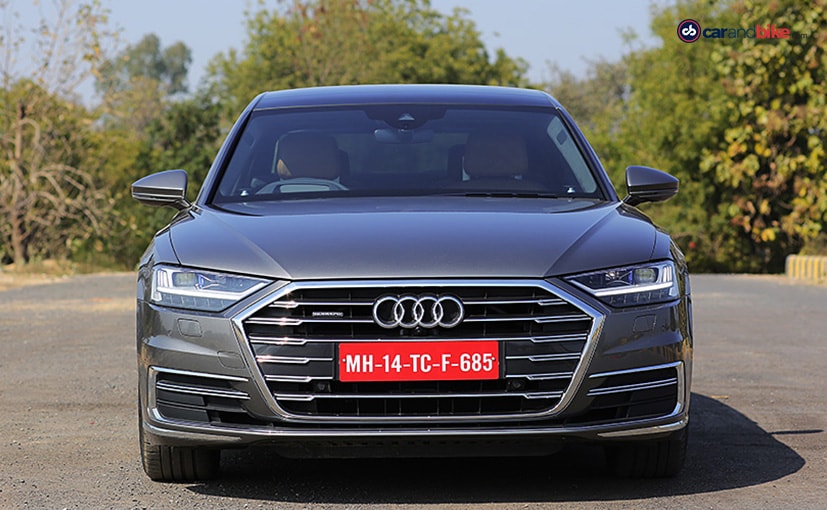 The protruding grille covers over half of the face while being flanked by slim laser-beam LED headlamps.

A similar flush approach can be seen in the overall design of the car as well. The new A8's front end is finished in bold chrome on the fringes with sleek chrome slats, the protruding grille covers over half of the face while being flanked by slim laser-beam LED headlamps integrating Audi's new signature DRLs. 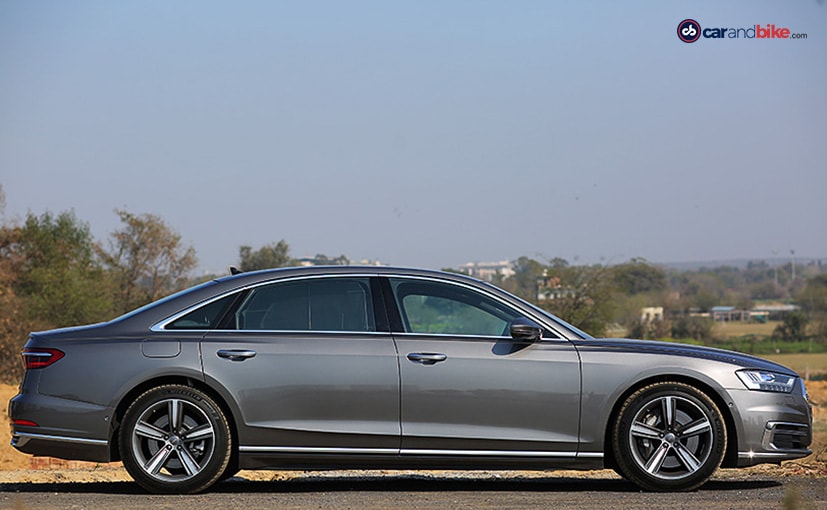 Then there are those sexy 19-inch five-spoke alloy wheels that are just the right fit and the sculpting on the profile with sharp character lines add to the chiseled looks of its otherwise long fleshy exterior. 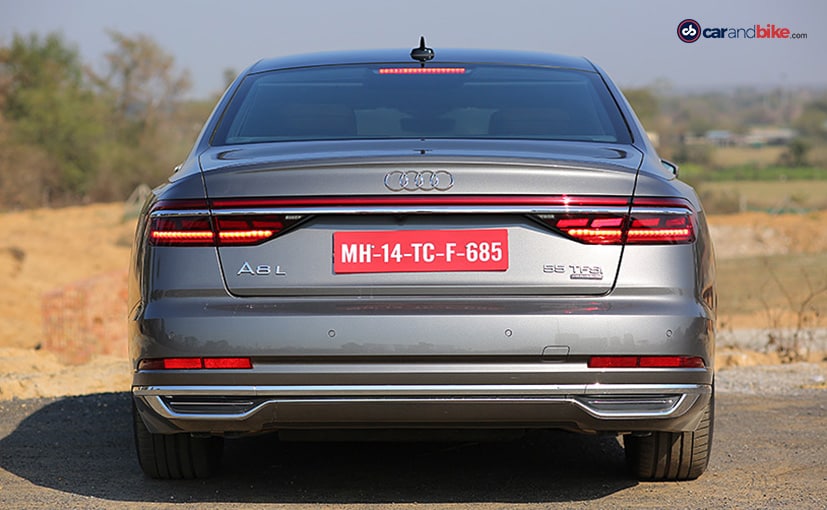 There is aesthetic use of chrome in the conjoined tail lamps and around the pseudo exhaust tips.

The rear also is very similar to modern era Audis with a sleek chrome strip in the conjoined LED tail lamps and on the pseudo exhaust tips. Yes! It's the car that stands out in a crowd but isn't exactly a head turner.

How The Chauffer Feels 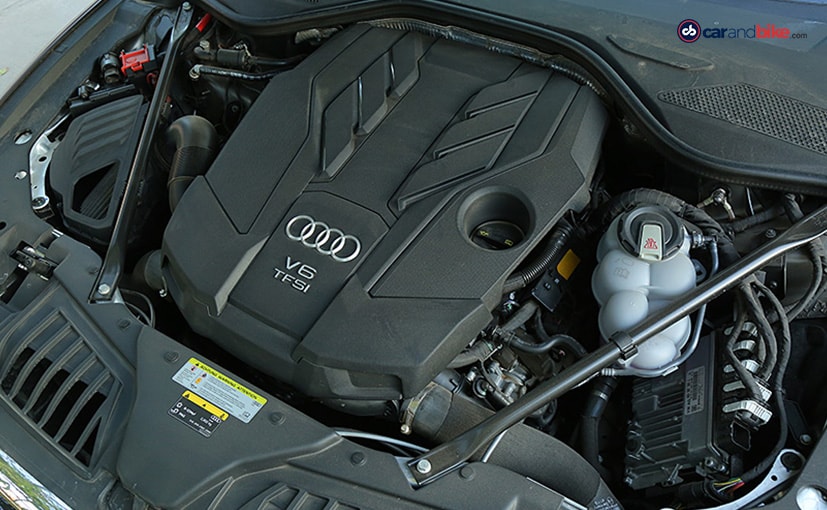 India gets just the 55 TFSI iteration with a 3.0-litre V6 motor which is coupled with a 48-volt hybrid motor.

Done with all those goodies, let's get into the chauffer's shoes to know how this limo drives. First things first, the India-spec car doesn't come with the level 3 autonomous systems but you do get features like autonomous braking, lane monitoring and pedestrian protection system. Also, we just get the 55 TFSI iteration with a 3.0-litre V6 motor that belts out 335 bhp and 500 Nm of peak torque. The addition though is the 48-volt mild hybrid system which enables idle start-stop and builds up on the power at initial revs. 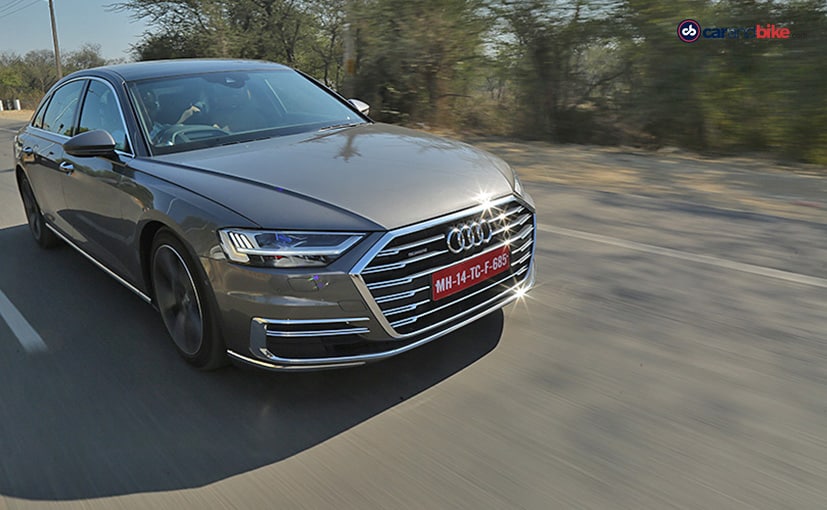 The sheer punch from the V6 mill gets you grinning every time you mash the throttle.

At no point did I complain about the power delivery and the sheer punch from the mill definitely had me grinning every time I pushed the throttle. The eight-speed tiptronic automatic transmission takes about a second in sending power to the four wheels, so yes! There's a delay. That said, it coasts to triple digit speeds effortlessly, clocking 100 kmph in just 5.7 seconds and top-speed is governed at 250 kmph. 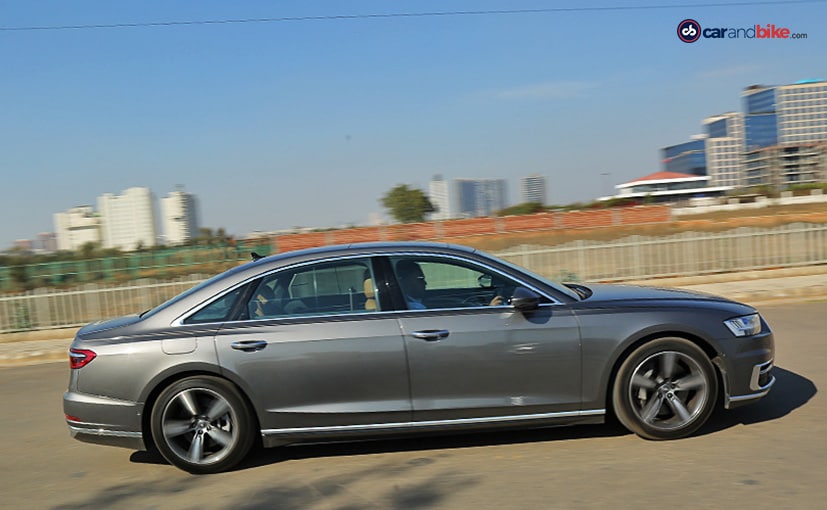 The steering now feels better connected by Audi standards as you pick up the pace.

The steering is nice and light at lower speeds and comes in handy while nipping in and out of city traffic, while it feels more connected as you pick up the pace, giving more surety while changing lanes on highways or taking a sharp bend. 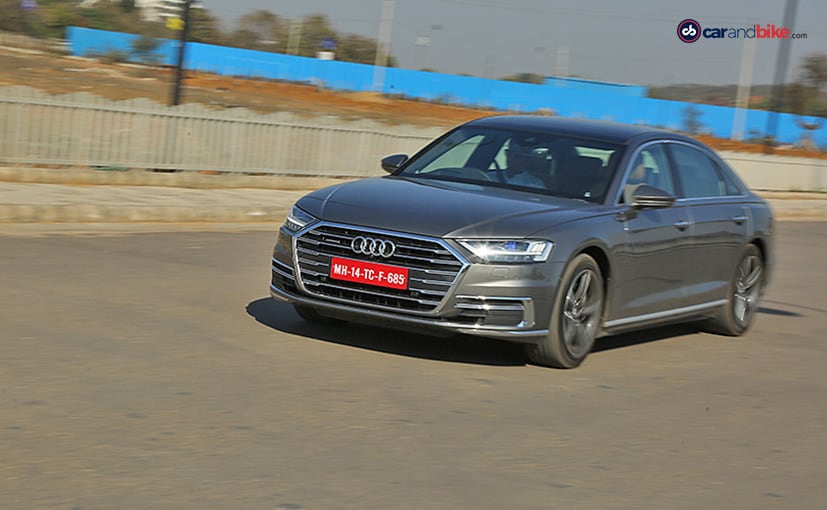 The adaptive air suspensions with actuators at all four corners soaks up the potholes and undulations pretty well.

Though it can take even long bends quite swiftly, but you need to slow down a bit on corners to keep the tail aligned. The A8 L also rides smoothly and that's to the credit of the adaptive air suspensions with actuators at all four corners which absorb all the potholes and bad roads that you come across.

Where It Fits In 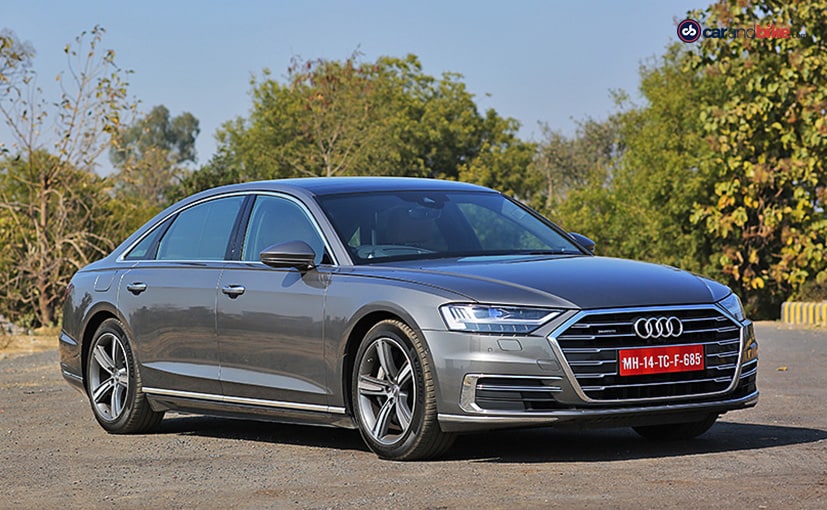 The Audi A8 L is an expensive offering coming in only as a completely built unit (CBU).

So finally coming to the big question, at ₹ 1.56 crore, the A8 is definitely an expensive affair compared to its locally assembled German counterparts. The benchmark in this segment - the S Class sees prices starting at ₹ 1.36 crore, being ₹ 20 lakh cheaper while the 7 series range starts at ₹ 1.23 crore topping out at ₹ 1.66 crore. So yes! There are more affordable options available. 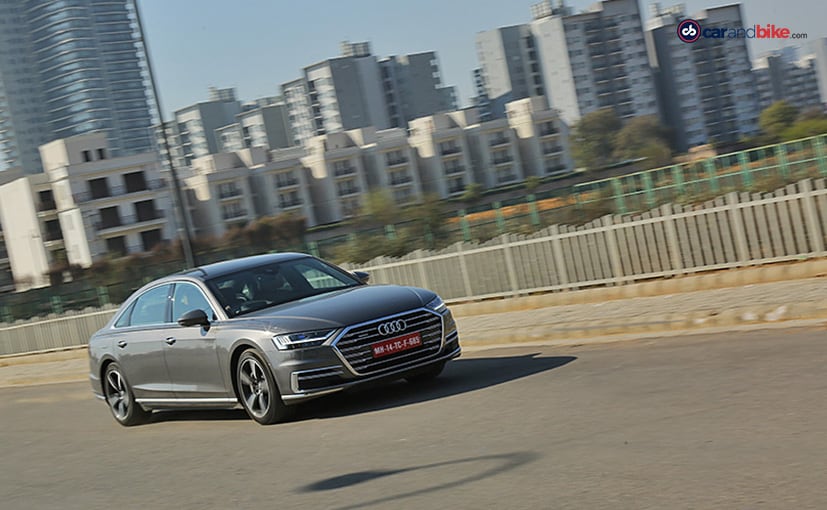 It offers enough lush and comfort for daily travel and makes a solid impression when showing up in a big fat party.

Having said that, in the luxury space everything boils down to your personal preference it terms of looks and feel and the Audi A8 L being the latest offering has certain novelties in the way the cabin has been executed. It's one of those limousines which offers enough lush and comfort for daily travel and you won't even shy away from making a strong impression at a big fat corporate party or your regular club for that matter, showing up in this one.