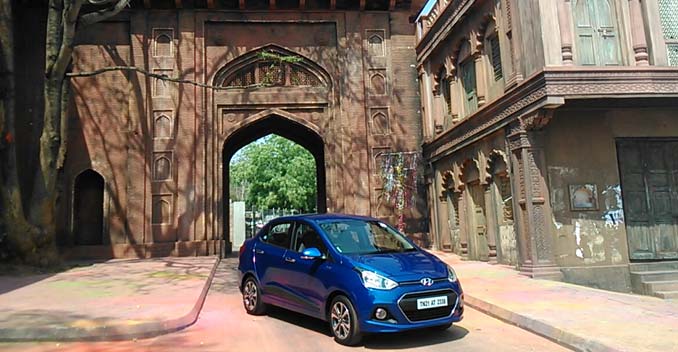 To take on highly successful products like the Maruti Suzuki Dzire and the Honda Amaze in a highly competitive segment might be intimidating for some car makers but not for Hyundai. The base models for Hyundai Xcent petrol has been priced aggressively at Rs 4.66 lakh (ex-showroom Delhi) well below that of the Honda Amaze which starts at Rs 5.04 lakh and Maruti Dzire at Rs 4.85 lakh. The diesel base variant too is priced below its rivals at Rs 5.56 lakh while the Amaze is at Rs 6.02 lakh and the Dzire at Rs 5.78 lakh. The Korean auto maker seems confident, maybe a bit over confident that its sub 4-metre sedan Xcent will be a sure-shot winner. With an attractive price tag for both the petrol and diesel variants and built on the same platform as the popular Grand i10 hatch, we are not surprised with the high confidence levels. (See: Hyundai Xcent image gallery)

We drove both the engines to test Hyundai's claims that there was a bit more punch in the performance of the Xcent. In terms of driving dynamics, the Grand i10 proved to be an ideal city car with a quick and responsive engine but was found a bit underpowered on the highways. With the Xcent's U2 CRDi, Hyundai has tweaked the 3 cylinder engine which now has an electronically controlled waste gate turbocharger (WGT) to boost torque by about 13% over the Grand i10. Keep it in the mid-range and only then can you possibly feel the difference in torque. The well insulated cabin cuts out most of the diesel engine noise especially in the low rpm range and the slight vibrations while idling are not too much of a bother. 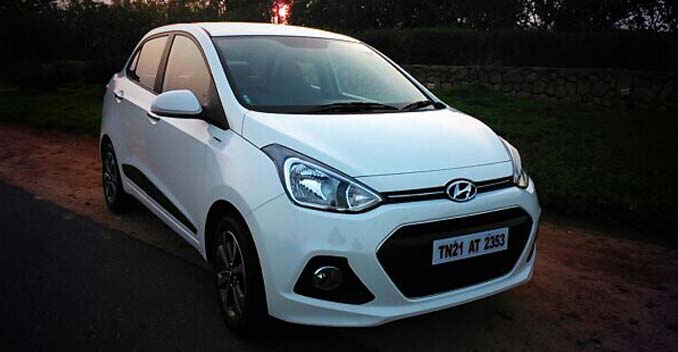 The 1.2 litre Kappa engine continues to be as lively and responsive on the Xcent as it was on the Grand with 82 bhp of power on tap. Putting it in heavy city traffic wasn't a challenge for this peppy engine as we could be on a high gear at low speeds without a hitch. Acceleration is smooth and quick, power delivery is linear and getting to the three-digit mark is not a problem. On the open road, we managed to push it to about 140 km/h and the car's extra weight didn't seem an issue for the engine.Hyundai says the ARAI-tested mileage on the petrol is 19.1 kmpl, while for the diesel it is at 24.4 kmpl. And Trust Hyundai to make things interesting in this compact sedan segment by offering a four-speed automatic on the petrol engine.

The ride and handling characteristics are mostly similar to the Grand with minor changes to the suspension layout. The steering feels light, quick and easy to dart across in the city traffic. The gearshifts on the Xcent was very smooth and precise making the drive a breeze in city traffic. Inside the cabin, seats are firm and comfortable both in the front and rear. And despite a similar wheelbase, the rear of the Xcent offers more legroom than the Grand to give it a sedan-feel. As we sat in the back, we got to enjoy the the rear AC vents that worked well to keep away the summer heat in Hyderabad. 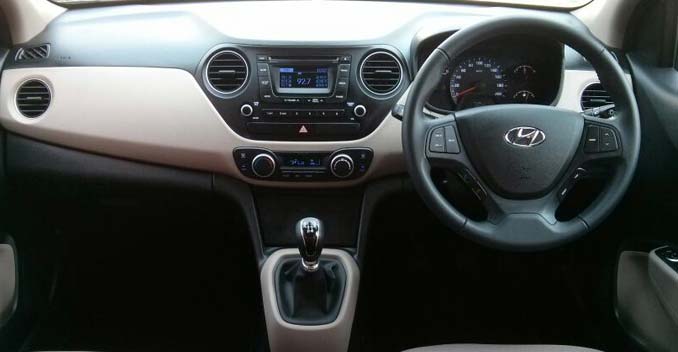 The styling on the Xcent is neat and makes the sub 4 metre sedan look proportionate but somehow doesn't look as stylish as the Honda Amaze. The design on the front has been more or less left alone to remind you of the hatch but the side profile looks a bit more dynamic with aerodynamic lines and a black coloured body moulding. The mirrors are eletronically adjustable and fold in or out automatically when locked or unlocked. And while the rear is well proportioned, the stubby feel to the boot reminds you a lot of the old Dzire. Also the wrap around tail lamps look a tad small on the rear and don't seem to have much to wrap around. The Xcent gets 15 inch diamond cut alloy wheels on the top-end variant which does give the design an upmarket feel. Available in six colours, we expect the red and the blue to be among the top picks among Xcent buyers. 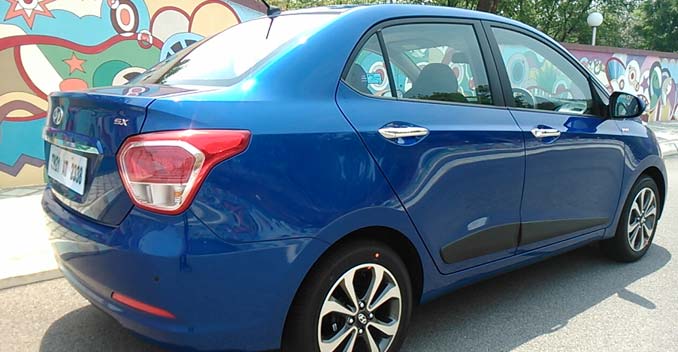 As expected, the cabin of the Xcent is feature-rich like its hatchback sibling and in fact comes with a few more to impress buyers like a rear-parking camera on the mirror and automatic climate control. The cabin is roomy with a well laid out dash in dual tone beige/black interiors and an integrated music system. The quality of the plastics are impressive and the cabin of the Xcent is a bit more appealing than the Amaze or the Dzire. Xcent is being offered in three variants - base, S and SX. Dual front airbags are available in the SX variant and optional ABS in S and SX. 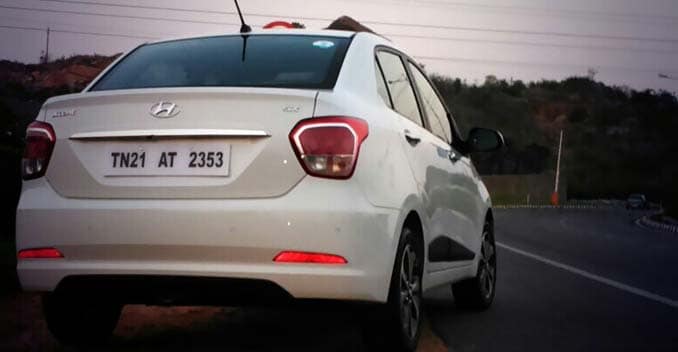 And with competent pricing, Hyundai feels half the battle has already been won. Adding to the overall appeal will be the rich feature list and the already proven engines. Little wonder then, the Koreans are over-confident about the Xcent!!