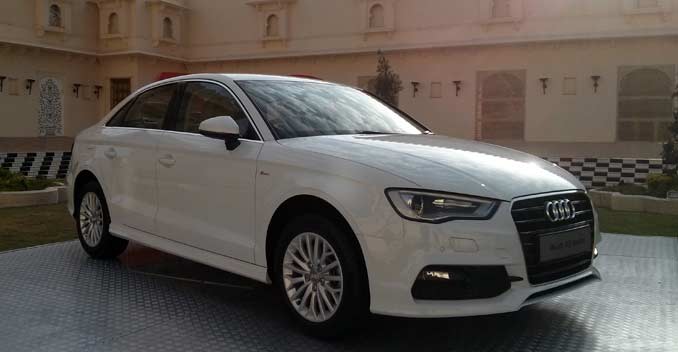 We've always seen the Audi A3 as a sportback and after 16 years of getting used to the idea, you really don't see it in any other form. But the people at Audi decided to go back to the drawing board and thought, "Well, let's add a boot to that and make it a sedan". Soon enough, Audi showcased the sedan avatar of the A3 at the Geneva Motorshow. One look at the car back then, and we knew for sure that it was going to make its way to India. Well, guess what? The wait is over, for the A3 sedan has finally landed on Indian shores.

The younger sibling of the A4 will be placed in a segment that already fields players like Mercedes-Benz (A- and B-Class) and BMW (1 Series). However, they are all hatchbacks and that's exactly where the Audi A3 gets its edge. It is the first sedan amongst these hatches, and that is one reason why Audi will have the upper hand by bringing the A3 to the party.

It feels a little bit like deja vu when you first look at the Audi A3, because it shares a handful of features with its other siblings. The front grille, for example, shouts A4, A6 and A8 and if you see just that frame in your rear view mirror, you won't be able to tell the difference. 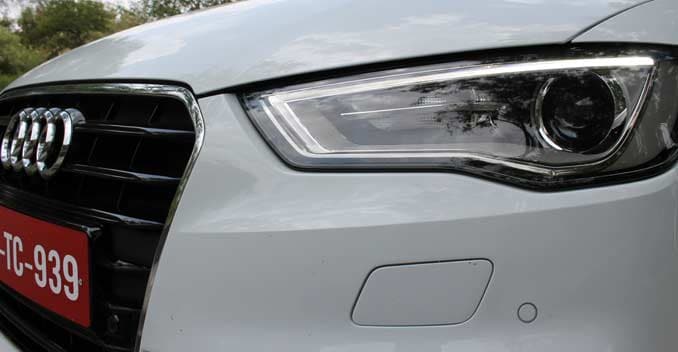 But the folks at Audi know that the A3 would obviously need its fair share of individuality. That's where the Bi-Xenon head-lamps, day time running LEDs, low slung appearance and the large air inlets ot the front come into play. The sides of the car are adorned by sharp lines that extend right up to the rear. The negative surface on the wheel-arches truly add to the car's sporty factor.

All that put together, the A3 looks very sharp and stylish, which is why it will primarily target a rather young audience. The Audi A3 will be offered with two engine options, i.e. the 1.8-litre TFSI petrol and the 2.0-litre TDI diesel. We weren't told much about the variants, but from what we could see, the A3 sedan's lineup in India will comprise of a total of 4 variants - 2 in petrol and 2 in diesel.

I drove the top-of-the-line diesel model but couldn't get my hands on the petrol version, because Audi thinks that 90% of the A3's customers will opt for the diesel variant. That says a lot about the company's strategy as well as customers preferences. Anyway, let's get down to business, shall we? 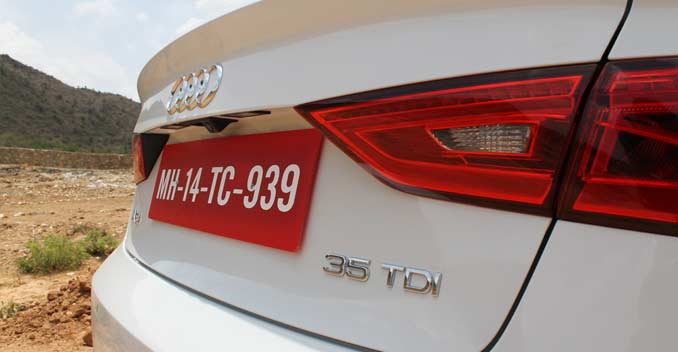 The Audi 35 TDI (as it will be now called) is the new 'dynamic factor' nomenclature. It is a technical term for a system used to calculate the performance of a given model and variant. In lay man's terms, the higher the number, the quicker it will get to 100Km/h.

So, back to the 35 TDI. It gets a 2.0-litre, in line 4-cylinder with VGT turbocharger diesel powertrain that puts out 143bhp and develops 320Nm torques at as low as 1750 rpm. That's a lot of power, if you take into account the performance of its rivals, namely the A-Class and the BMW 1 Series. It goes from 0-100Km/h in 8.6 seconds and boasts of a top-speed of 224Km/h. Power delivery is seamless, thanks to the 6-speed S-tronic dual clutch transmission. Though there is a bit of hesitation in the diesel, which translates to some turbo lag too, it didn't bother me because there is enough power to deliver the thrills. 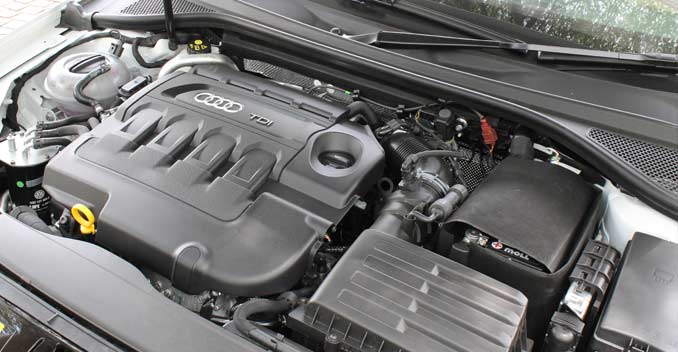 On highways like the one I drove on, the Audi A3 crossed the three digit mark without a hint of hesitation and it kept on going. Even if you push it till its ragged edge, it never disappoints. Since it's a diesel, it does grunt and groan and a little bit of noise enters the cabin even if it is in the idle state. However, the tyre noise and the engine noise are well contained in cruise mode.

The next in order of importance is the space it has to offer. At 4456mm long, the A3 isn't as compact as you would think it is and a wheelbase of 2637mm convinces you that the cabin does offer a bit more space. The A3 can easily seat 4 people, and even though some might find the rear a tad bit cramped, the car offers good headroom and leg room for the average Indian. That said, tall folks, i.e. people with a height measuring 6-feet and above, might experience a little discomfort. 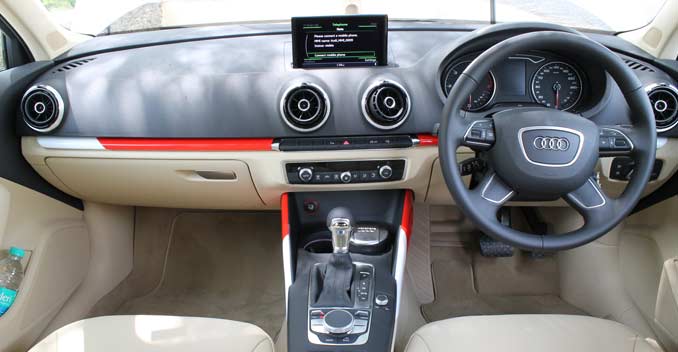 Moving on to features, Audi has managed to pack in a lot in the A3. The top-end S line gets MMI navigation plus with MMI touch, 7-inch retractable display, dual-zone air conditioning, rear view camera, LED interior lighting, Milano leather upholstery, electronically adjustable front seats and a panoramic sunroof. Whereas the base variant gets everything else except navigation that shows just how much Audi is willing to deliver in terms of features.

Check out our Photo Gallery here

So how much will it cost? We asked people at Audi, and this is what they had to say: the A3 is meant for those who want an upgrade from the likes of Honda Accord, Toyota Camry or even a Volkswagen Jetta. For people own a Toyota Fortuner or a Chevrolet Captiva, the A3 can serve as an option for a second car. Then again, it will also compete against the Mercedes A- and B-Class and the BMW 1 Series. Long story short, though they eluded the question about its price, the aforementioned explanation indicates that the car will come at a premium price, and we think it'll be just a little shy of the Rs 25 lakh mark.

Audi seems to have nailed it with the A3, which will serve as their medium of staying on the top of the game. Considering that Mercedes-Benz will get the CLA sedan only next year and BMW will follow suit with the 1-series sedan, Audi is effectively the first one to arrive in this particular market. The A3 will be launched in August this year and I am going to keep my fingers crossed about a competitive pricing strategy till then.