The latest from Wolfsburg is the Volkswagen T-Cross. We test it in sunny Spain and find a competent, well-designed compact SUV. This will be the MQB A0 platform SUV that has been talked about aplenty in VW and Skoda's big plan for India. Expect it to hit the market only next year. 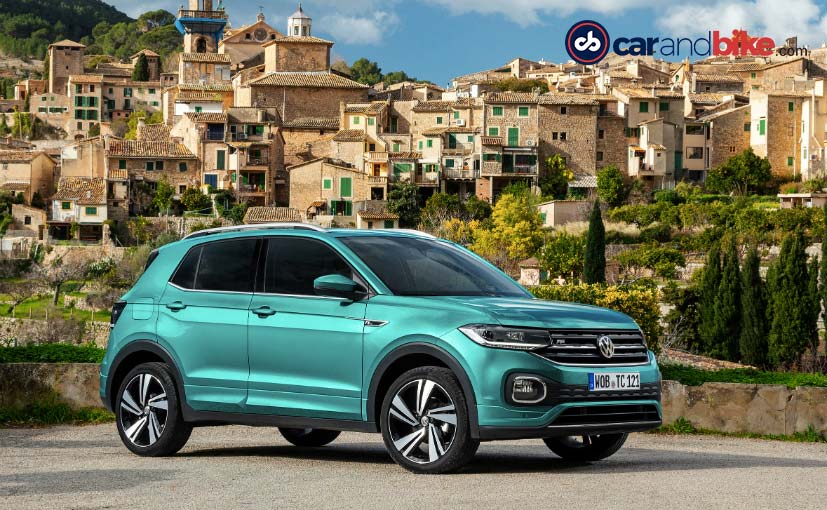 Skoda is leading the turnaround for the VW Group in India. But the first phase of that will see the launch of several MQB A0 based SUVs - ranging from the subcompact to the midsize. The first car expected is the Volkswagen T-Cross along with its like Skoda counterpart - the Kamiq. Both cars will be modified for India, and we won't we surprised if one or both are also trimmed to be sub 4-metre. But that is still a long way away. The new year is one of major plans and changes for Volkswagen globally too. The debut of the fully electric ID models is imminent, and the electric chapter was heralded at the 2019 Geneva Motor Show. But even though the electric visions seem almost too good to be true, somewhere the money has also to be made to help fund those plans. And that's the task of more down-to-earth cars - like the new T-Cross, which we have just driven on the Spanish Island of Mallorca. 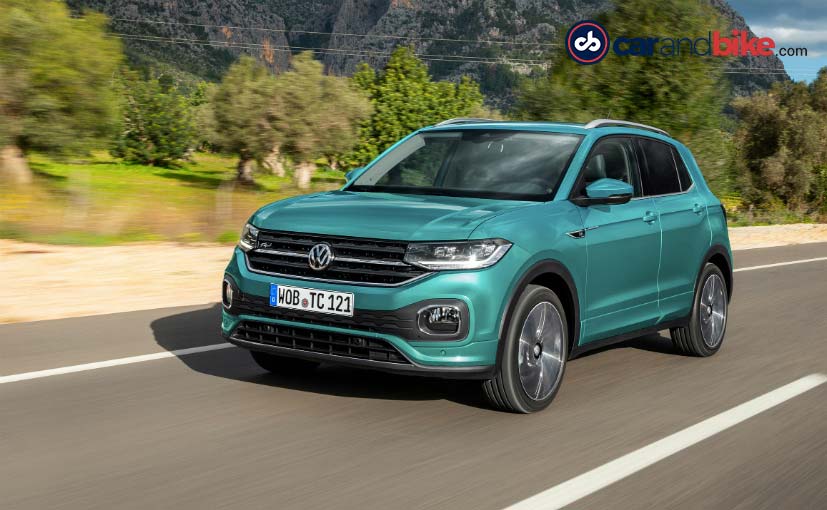 (The Volkswagen T-Cross is built on MQB A0 platform)

While Volkswagen merely hopes that EVs will be bought in significant quantities, the company can be almost certain that compact crossovers like the T-Cross will be a smashing success. The development team took a close look at the segment and the customer base, and came up with a crossover that is closely related to the new generation Polo, that conveys some off-road romance, that offers many customisation options and yet remains solidly grounded in what is undoubtedly a price-sensitive segment. So there is no four-wheel drive version and no high-performance version a la GTI or R . VW leaves those tricks to the more upmarket, Golf-based T-Roc (the differentiation between T-Cross and T-Roc must be memorised, and the oh-so-similar names are not helpful!). 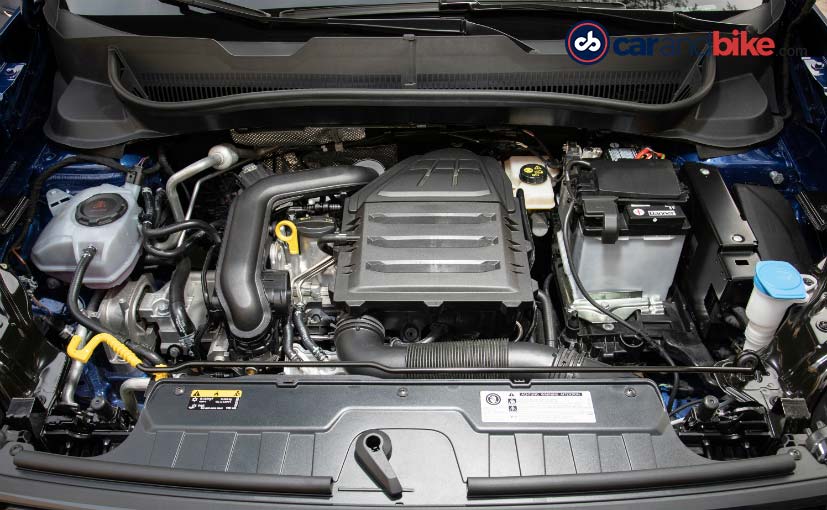 In Europe, the T-Cross will be offered with a 1.0-litre three cylinder, a 1.5-litre four and a 1.6-litre diesel four. While the 150-horsepower 1.5 was not yet available for evaluation, we got time with the others. The relatively quiet-running 1.0-litre three-cylinder turbo can be specified with 93 bhp or 113 bhp. The 93 bhp version has a five-speed manual transmission, while with the113 bhp, a six-speed manual is standard. Pay more for a "dry" seven-speed dual-clutch transmission, which can be operated manually in a separate shift gate or with paddles on the new three-spoke steering wheel. 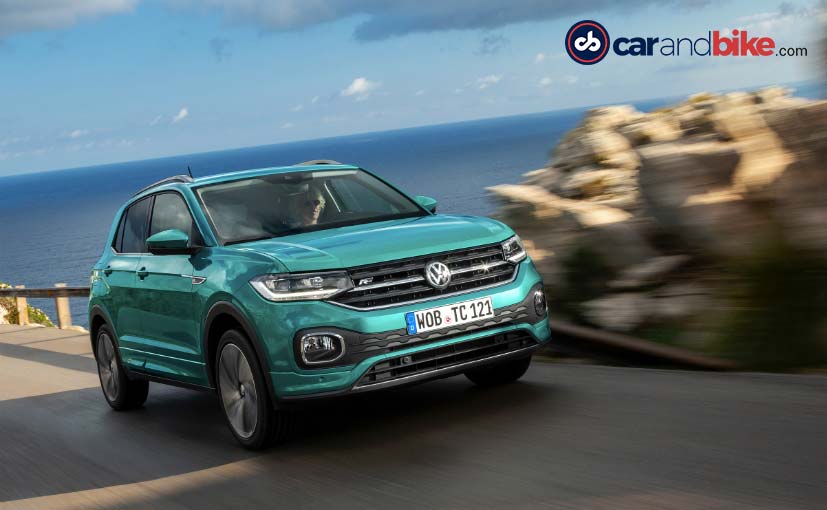 We found the 113 bhp engine to be noticeably more agile when mated to the crisp manual transmission than with the near-perfect but somewhat lifeless dual-clutch automatic transmission. With the manual, it is fun to chase the T-Cross over twisty roads, but when you force it, consumption can approach around 14 kmpl. The upcoming 1.5-litre four will be available only with the dual-clutch automatic. The 1.6-litre four-cylinder diesel with 93 bhp is fitted with a tall-geared five-speed manual transmission or the same dual-clutch automatic that can be mated to the two higher spec petrol engines. The diesel purrs confidently and pulls strongly throughout the rev range, right from the bottom. It was easily possible to stay at around 20 kmpl mileage, and when we drove it in an uncharacteristically defensive manner, we even got close to 25 kmpl! Which proves again that in terms of consumption and CO2 emissions, the diesel is virtually impossible to beat. There is no hybrid variant, and it would make little sense in this price-sensitive segment. 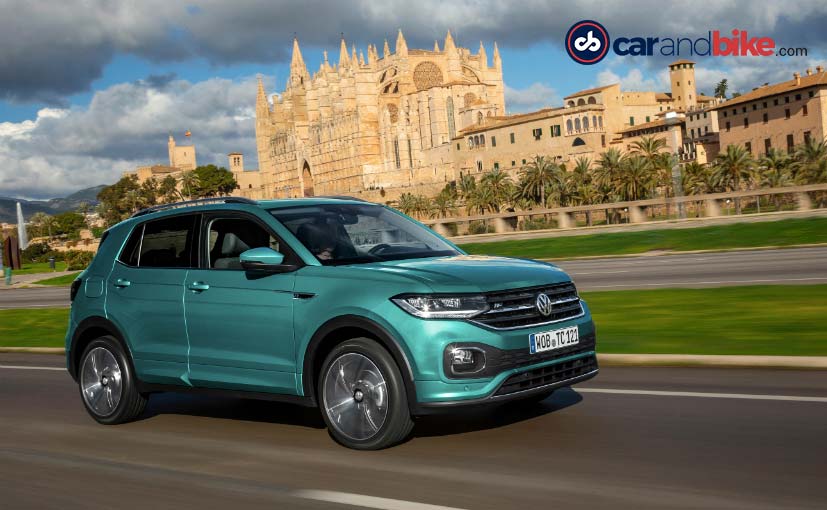 (The steering provides precise feedback, the T-Cross is predictable and it remains neutral up to the limit)

The balanced, pleasantly firm suspension is not exactly overstrained by the powertrain's performance. The steering provides precise feedback, the T-Cross is predictable and it remains neutral up to the limit. The stability control system intervenes rarely. This small crossover is also comfortable on long hauls - and it is unusually quiet. We even found out that you can go far off the road, thanks to the high ground clearance and balanced ESP tuning. Wheel sizes are between 16 and 18 inches. In India expect the 16 inchers as standard. 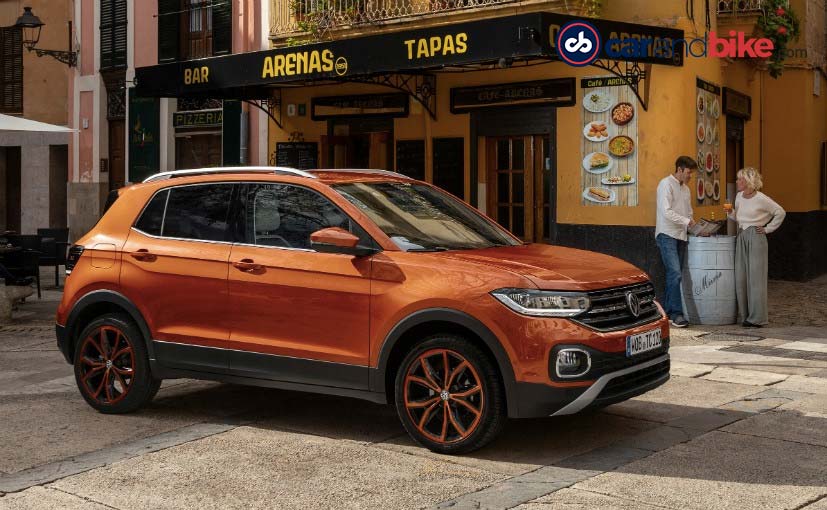 The precise and predictable chassis means active safety, but Volkswagen has not stopped there. In Europe, it is fitting the T-Cross with a suite of electronic safety systems that reaches far beyond the standard in the class. These systems include, for example, pedestrian detection, blind spot monitoring and a lane departure warning system. At an extra cost, there is adaptive cruise control and a parking assistant - which the T-Cross, with its boxy sheet metal, would actually not have needed. The excellent lighting also provides safety; you do have to pay more for the all-LED headlights, but the LED taillights are standard. Let's hope that all of these great features are offered in India as well - at least the adaptive cruise control and parking assistant. 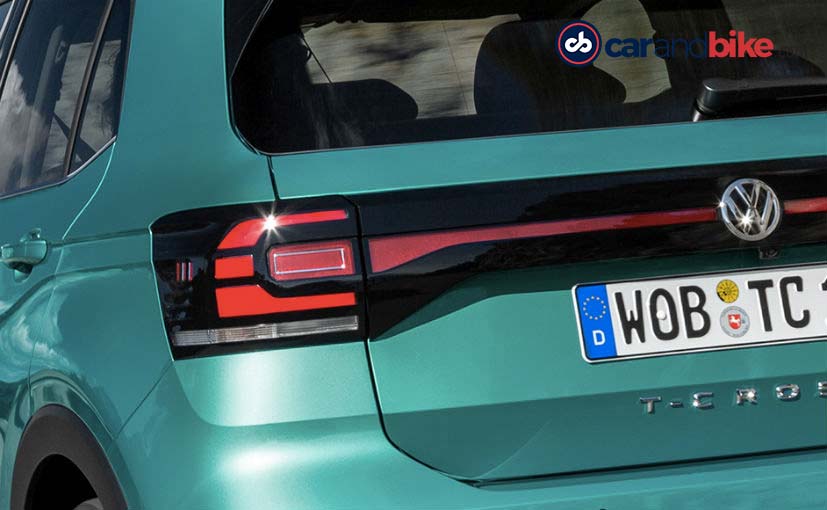 (The tail-lights are connected with a reflector strip that is not fitted on any other VW, providing a unique styling element)

Incidentally, the taillights are connected with a reflector strip that is not fitted on any other Volkswagen. It provides a unique styling element on this crossover, which otherwise does not exactly stand out from its sister models. But VW does offer many forms of customisation and individualisation, at least on its European spec T-Cross. Let's hope some of that makes it to apna desh too! 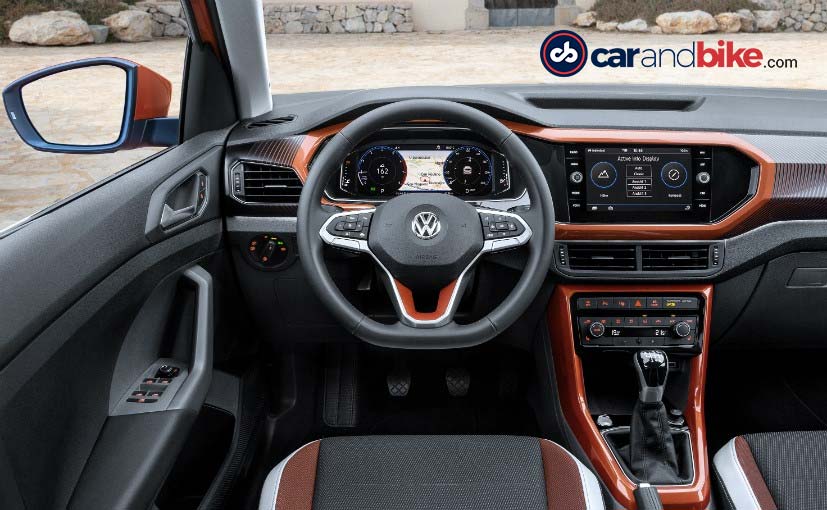 In addition to three basic equipment levels, there is a sporty R package as well as design packages, whose meticulously crafted interiors correspond with colourful, painted wheel rims. The three-dimensional decor for the dashboard looks great. And frankly is quite a step-up from bigger sister T-Roc. The T-Roc is also expected to come to India by the way - and we are the only ones from India to have driven it so far. You can read Siddharth's review for that car in the link given below. 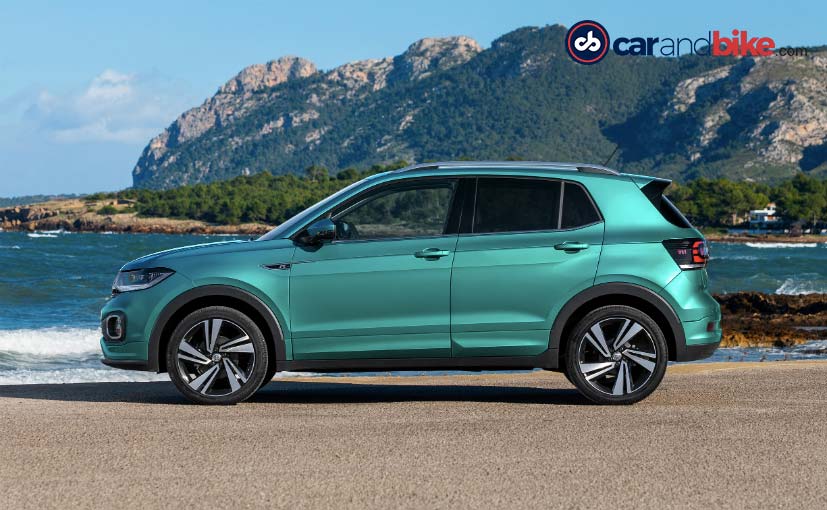 The decor accentuates an interior that is unusually generous, given the exterior length of just 4110 mm. The 2550 mm wheelbase certainly helps, as does the 1580 mm height. The rear bench can be moved forward or backwards. You can slide the car's rear bench seat forward or back. It can be moved by 140 mm, noticeably increasing the second row legroom, or giving you a bit more cargo space in the boot - as the case may be. The boot volume is variable between 385 and 455 litres. Despite the elevated seating position, there is plenty of headroom. In fact, there is so much of it that VW could well have offered a sunroof or panoramic roof. Note to VW for a top-spec for India perhaps? We all know how inexplicably sunroof obsessed Indian buyers appear to be at times! 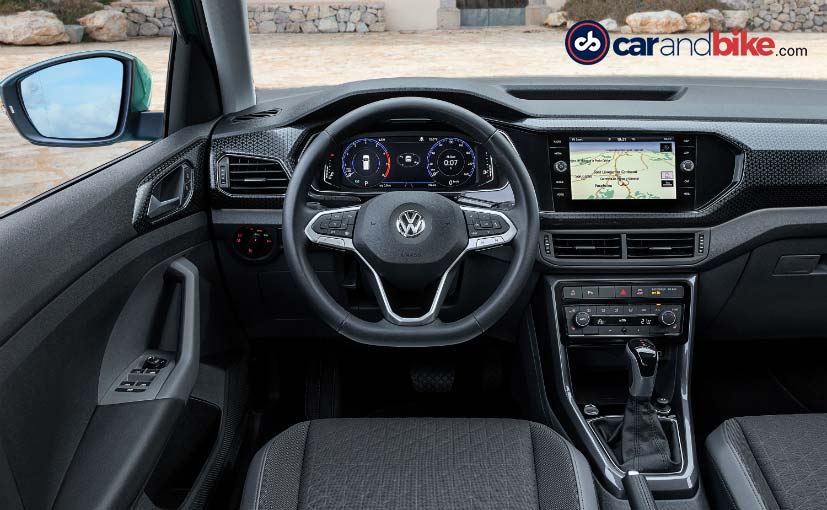 Last but not least, let's point out the sophisticated infotainment and telematics system. Volkswagen has tackled this increasingly important area in the form of several USB ports and a wireless charging option for suitably equipped mobile phones. Pay extra and you get the Beats 300-watt speaker system. And it is good to see the car offering a nice contemporary infotainment and connectivity package. You can use Apple CarPlay or Android Auto of course. And then there is the Volkswagen Connect app, which the company says, acts as a personal vehicle assistant. It informs you about the car's condition, the remaining route or journeys completed and even the analysis of your driving behaviour. The app can be downloaded for free from the App Store or Google Play. 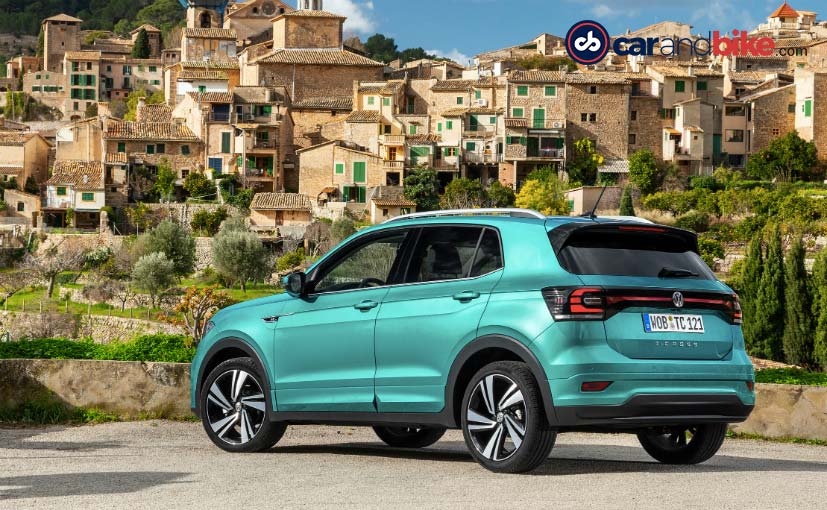 Of the many advances expected with VW this year, this new model is undoubtedly one of the most convincing. Drive it, feel it, and you will see: The guys that brought us the GTI and the Touareg simply know how to make cars that just feel right. It would enhance the driving benchmark that currently exists in this segment in India. And so given its style quotient and build quality we reckon could very well become the segment benchmark as a whole when it gets to us next year. The main competitors of the new T-Cross in Europe include its sister model the SEAT Arona, the Peugeot 2008, the Opel Crossland X and the Ford EcoSport. 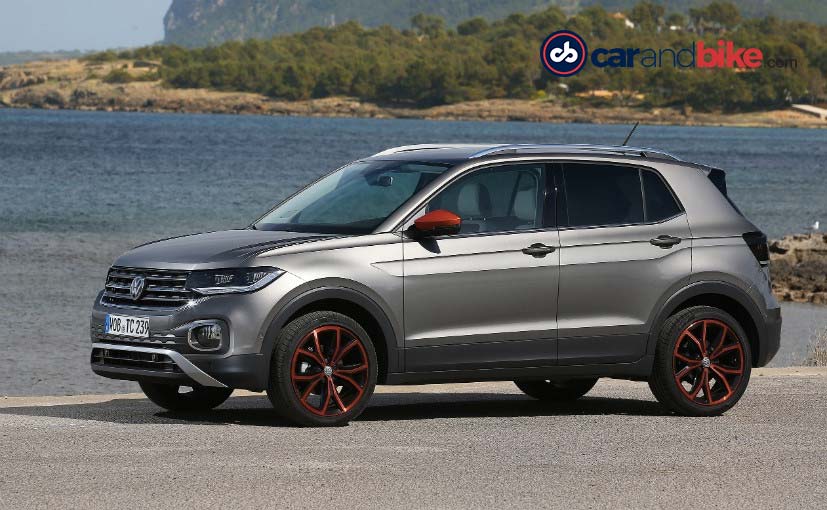 In Europe too, we believe the T-Cross may well take the lead in this segment, given its perfect workmanship, efficient powertrains and well-balanced suspension. In India it will have to take on that same Ford model, as also the new Mahindra XUV300, Tata Nexon and Maruti Suzuki Vitara Brezza of course. Prices in Europe start at 17,975 Euros but the Indian-made model will be differently specced and hence we expect it to start around ₹ 9 lakh and top off at about ₹ 12 lakh. Anything higher will put the T-Cross into Creta territory. And for that segment VW is already preparing the T-Roc isn't it?