US-based motorcycle brand Cleveland CycleWerks has entered India with its range of motorcycles, and we test out its very first offering - Ace Deluxe - a modern classic 229 cc bike. 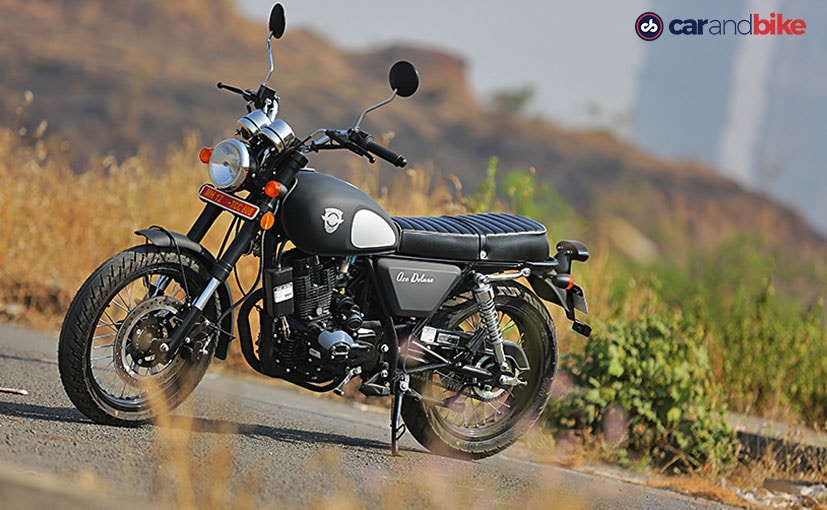 Retro motorcycles are the coolest things on two-wheels right now and the masses are more than willing to accept old designs packaged with modern mechanicals. While we've seen the smashing success of Royal Enfield in recent times and more recently the hype surrounding the resurrection of the Jawa brand, a lesser-known manufacturer called Cleveland CycleWerks (CCW) also aims to tap into this segment with its range of small capacity old-school offerings. The US-based company made its India debut at the 2018 Auto Expo and has tied up with Laish Madison Werks Pvt. Ltd. for the assembly and sale of its motorcycles. The Cleveland Ace Deluxe is the first offering from the manufacturer and we took the retro motorcycle out for a spin to find out what it has to offer. Before we divulge into what the Ace Deluxe is all about, let's give you a quick history lesson into the origins of Cleveland Cyclewerks. Headquartered in Ohio, US, the motorcycle company was started by Scott Colosimo and Jarrod Streng in 2009 and its bikes are sold in over 23 countries globally with India being its newest market. The company has started operations with the sale of two motorcycles - Ace Deluxe and Misfit - and plans to add a few more to its line-up as time progresses. This includes a custom bobber and a scrambler-styled offering. CCW imports the motorcycle kits from China, which are then assembled at the company's assembly plant in Wakdewadi, Maharashtra. At present, only six to seven per cent of local content goes into these bikes. 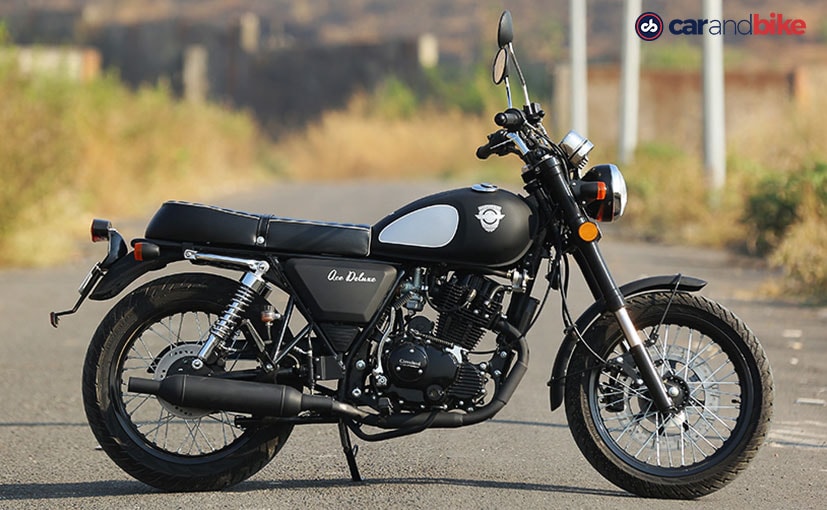 The CCW Ace Deluxe falls in the category of a modern classic but it's more classic than modern in its appeal. It was interesting to see the kind of attention that the Ace Deluxe commanded on the road. Other motorcyclists pulled with a series of questions ranging from "is this the new Royal Enfield or if it was the upcoming Jawa?" A brand introduction was what followed for most of the curious eyes. The design details are by the book including the round headlamp with the chrome bezel, 14-litre tear-drop shaped fuel tank and a flat leatherette finished seat. The Ace Deluxe merges a classic and Scrambler design, which gives it a slightly rugged look, especially in this matte black shade. Adding to that dual purpose styling are the chunky blacked-out upside down front forks, exhaust and wired-spoked wheels. The Ace Deluxe impresses with its retro styling and can work as a canvas for anyone looking to further personalise the motorcycle. 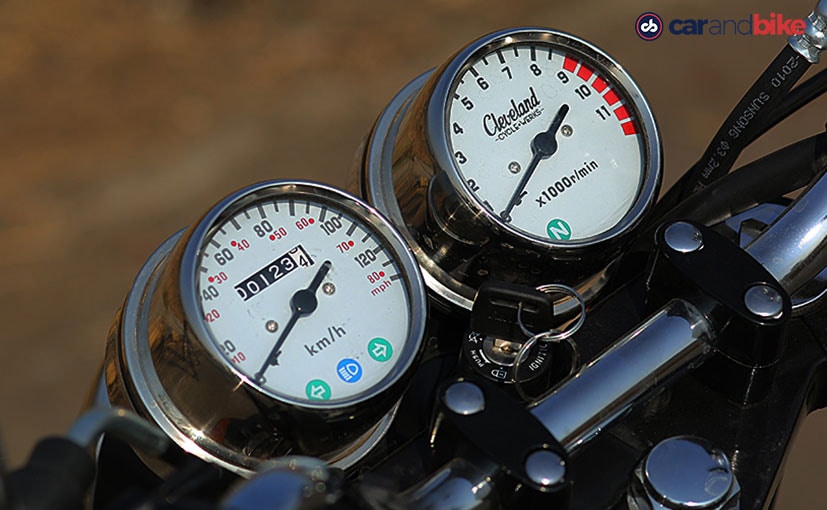 What does emerge as rather surprising is how compact the design really is. The bike measures 2120 mm in length, 830 mm in width and 1100 mm in height. And that isn't too different from your run-of-the-mill 125 cc motorcycle. The wheelbase is a short 1335 mm. The seat height is even lower at 760 mm, which further gives the bike a smaller appearance, but will be great for shorter riders. In terms of fit and finish, the Ace Deluxe decently holds well. The panels are put together well and the paint finish is impressive too. You can see the welds in places but the black painted frame does help to mask that to a certain extent. The matte finish also makes it easier to hold on to the fuel tank with your inner thighs while riding or even when standing on the pegs. That being said, the plastic quality can be better including the switchgear. My biggest grouse so far is the beam from the headlamp. The spread is almost negligible even in low beam. It's something that CCW is looking into, we are told. As a safety feature, you do get hazard lights, while the bike won't start if the side stand is down. 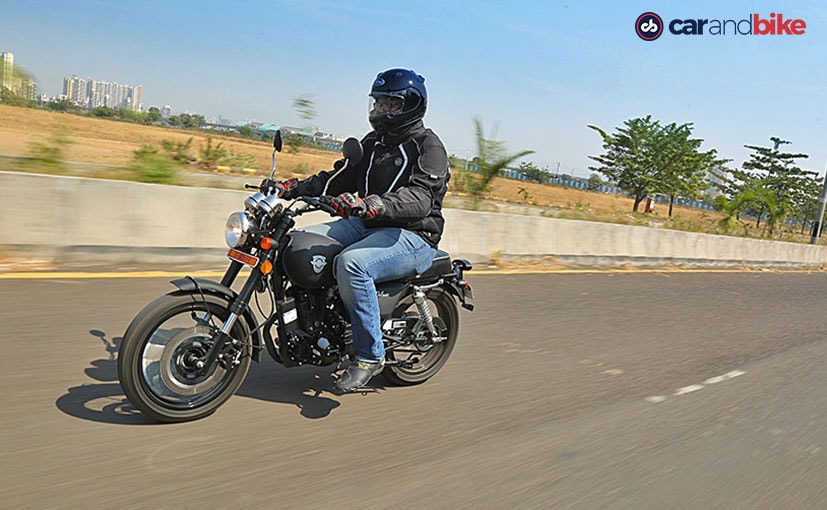 While its good looks and old-school charm beg for a second glance, the Ace Deluxe could've done with more power from its motor. The 229 cc single-cylinder, carburetted engine is tuned for 15 bhp at 7000 rpm and 16 Nm of peak torque at 6000 rpm. The motor is actually based on the older Honda CG series engines and used to previously power the Honda CRF 230 in South America. This unit has an Indian connection too, and from the outside, it does look quite similar to the one on the Hero Karizma. The 229 cc motor shares certain components with the Karizma's 223 cc mill, but gets a larger bore and stroke. The engine, like many other components is imported from China and is manufactured by the Lifan Group. 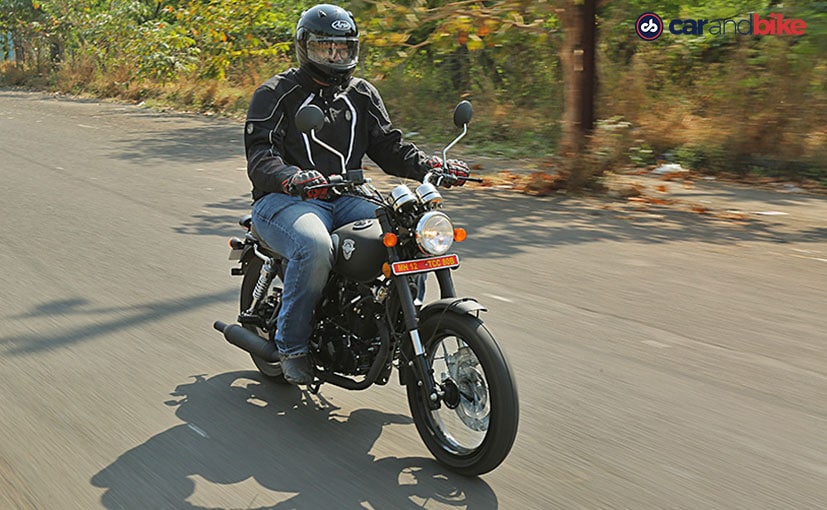 While the Karizma's unit was known for its smoothness and linear power delivery, this one is the slightly rugged cousin in comparison. The Honda lineage is apparent as soon as you start the engine with the motor being a refined unit, but there is a bit of jerkiness initially due to a snatchy throttle. At crawling speeds, you need to constantly shift to first gear to access power that comes after 2500 rpm, which does get cumbersome. Show it an open road though and the Ace is fairly quick off the line. The bike has a light kerb weight of 133 kg, which makes for a healthy power-to-weight ratio and it feels every bit eager to move. The surge in power can be felt all the way till 5000 rpm. Mild vibrations creep around the foot pegs and the seat at 6000 rpm, and the motor feels out of breath about 1000 rpm later. 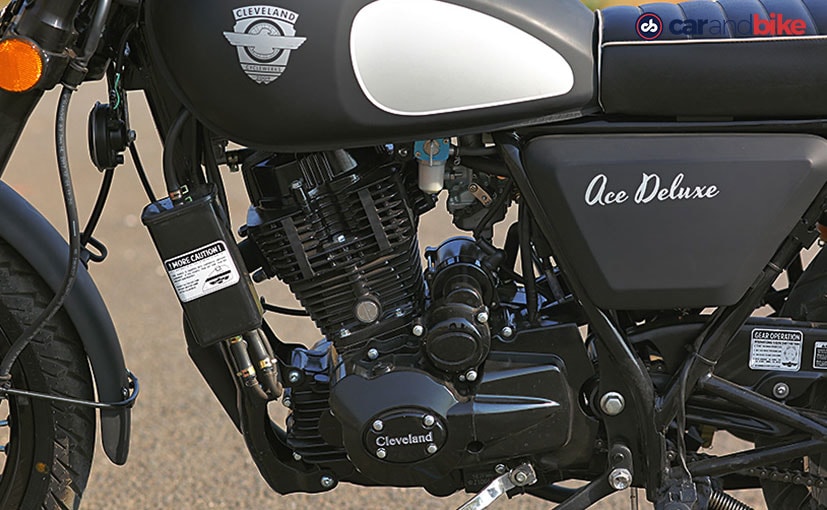 The Ace can easily cruise at 80 kmph in fifth gear at a comfortable 4000 rpm without breaking sweat, but it will take an open road and some patience to cross 100 kmph. We saw a speedo-indicated 110 kmph with some effort before the motor lost steam. So, there's no top end to make you go ga-ga over, but what is likeable is the bassy exhaust note on the Ace with its the dirt bike-like drone that gets attention from all quarters. A claimed fuel efficiency of 30 kmpl isn't too bad either. 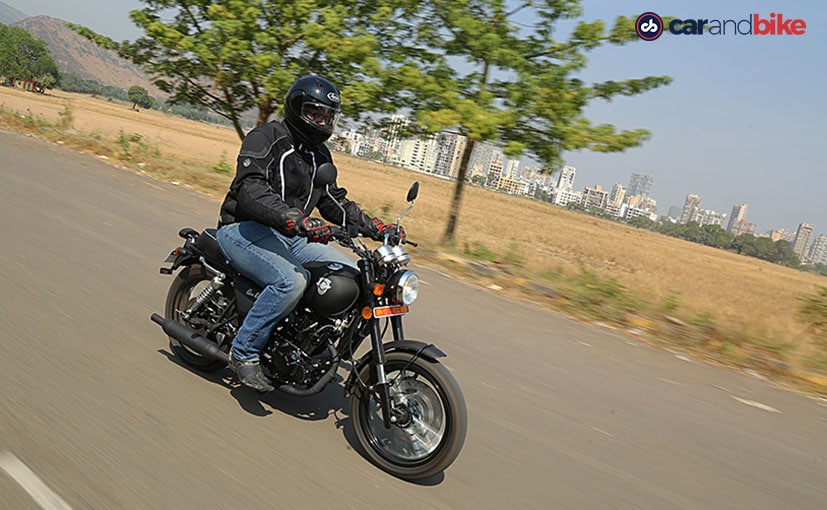 The ride quality is quite pleasant on the Ace Deluxe. The rider geometry is just about right with the centre-set foot pegs along with a flat and wide handlebar. You sit upright holding a very comfortable stance, and the low seat height makes it practically accessible to riders of all sizes. Add to that, the bike's light weight makes it easy to handle for less experienced riders, while female riders too will appreciate the accessibility the bike has to offer. The motorcycle comes with 38 mm upside down forks at the front with 110 mm travel, while the rear gets twin shock absorbers with 90 mm travel. The setup works well in absorbing most undulations on tarmac while being stiff enough to feel confident around a bend. Our test bike's seat had hard cushioning which would be nice on longer rides but takes a toll when riding in the city. A slightly softer cushion should make things a whole lot more comfortable. 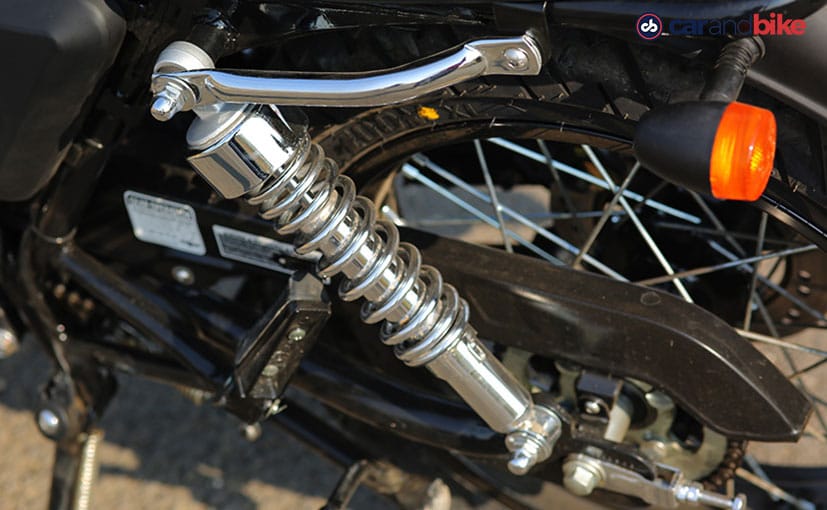 With USD forks up front and twin shocks at the rear, the suspension setup irons out most undulations

Handling on the CCW Ace Deluxe is good but can do with some improvement. It isn't too bad around corners, but needs correction more often than needed. The lean proportions do help you filter through traffic more easily than a larger sized offering. A low ground clearance of 155 mm means that you have to be careful of nasty speed bumps that end up scraping the rear brake pedal. The bike comes shod with CEAT tyres that offer good grip when leaning and also under heavy braking. Stopping power is impressive with the 298 mm single disc dual-piston calipers up front and a 210 mm single disc with a single-piston caliper at the rear. The front unit offers strong and progressive braking, and is complemented by the unit at the rear. That being said, the brakes do lock up when you press the lever hard in the absence of ABS. The safety feature, we are told, is currently under development and will be ready by April next year. That is also when fuel injection will be offered on the motorcycle. 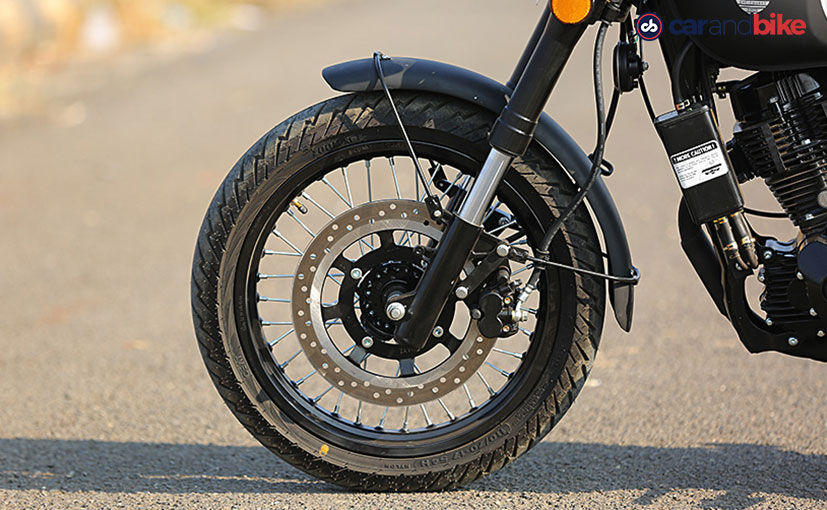 Where Can I Buy It?

Cleveland CycleWerks has just commenced operations in India with six dealerships including a few down South and an outlet in the North East. The bike maker's first outlet was opened in Vashi, near Mumbai in September 2018. The company plans to set up about 30 dealerships pan India by 2020. With the manufacturer still setting up operations, the cost of spares remain under wraps and we will update this review once we get more details. 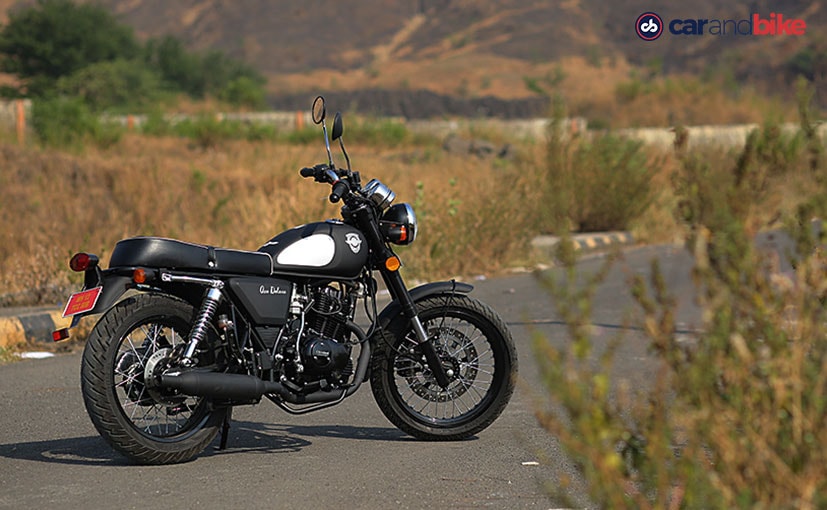 Priced at ₹ 1.85 lakh, The Ace Deluxe is an attention seeker and works well for city commute

The Cleveland Ace Deluxe has its positives, and there are some areas of improvement, but it's got a difficult task cut out for it, even though retro motorcycles seem to be the flavor of the market right now. The Ace Deluxe is priced at an introductory ₹ 1.85 lakh (ex-showroom), and that price tag will be a big challenge to get customers walking into a CCW dealership, and that too, considering you still miss out on ABS and fuel injection. A more competitive pricing is expected once when more locally made components go into the bike. A bigger engine is also being considered for the Ace Deluxe to balance the power to price ratio. On merit alone, the Ace Deluxe manages to bring something different to the table, while it is the easy ride-ability for all that will attract most of its buyers. But then, it's easier said than done to have a real shot in a market, which has an established and much-loved brand like the Royal Enfield dominating the sales charts. And now, with Jawa, another brand with a lot of history in India making a comeback, it will be an uphill task for sure for Clevelan Cyclewerks to create a niche following in the world's biggest motorcycle market.

DC Avanti
₹ 36.8 Lakh *
Subscribe to Our Newsletter
Over 1.5+ Lakhs subscribers
Thank you for Subscribing to Us