Audi has launched a number of vehicles in India, including the R8 V10 Plus and even the all-new Q7; but what everyone was left wondering was what it would bring to the luxury sedan segment. Well, the answer is here: it's the new generation of the A4. This is a rival to the Mercedes C-Class, BMW 3-series and the Jaguar XE and it's all set to hit the Indian roads. Audi will launch the car in the first week of September, but we got a chance to get behind the wheel of the new generation A4 and here’s what it’s like.

You look at it and it's got a nice sculpted body and the design can only be described as evolutionary. It looks fresh and the changed headlamps with the nice DRLs suit the new look of the car. The front grille still bears a resemblance to the family, but a lot of work has gone into making this one different.  The new-gen Audi A4 is lighter by 120 kg, as compared to its predecessor, given that a lot of aluminium has been used and that’s not only in the structure but also in its suspension setup. New Audi A4 in Built on VW's MLB platform

Built on VW's MLB platform, it gets a sculpted body, but unlike the Q7, which looks more athletic, the A4 doesn't stray far away from its predecessor. It has a conservative design approach; however, there are some changes, which make it stand out.

There's Audi's signature hexagonal grille, but it's a bit larger on this one and the head lamps are slimmer. Additionally, the top-end model will also come with Matrix LED headlamps, which will be an interesting feature addition to the Indian line-up. The rear sees sharper tail lamps and they taper well into the boot lid. You'll also notice sharp creases on the body panels and these are not just to improve aesthetics, but essentially to make the car more aerodynamic. Audi has managed to achieve a drag coefficient of 0.23 in the A4 and this is a record in its class. What it's also managed to do is spec it wonderfully and this is where all the technology inside the cabin comes to life. The design on the dash is new and refreshing. It follows the same single slab outline as the new Q7, which is why the air vents dominate the dash. Contrapuntally, we miss a little of drama on the dash, which we see in both the C-Class and the Jaguar XE. Yet, there's no way you can deduct any points for craftsmanship. The ace in the pack for Audi, however, will be the Virtual Cockpit, which replaces the conventional instrument cluster. 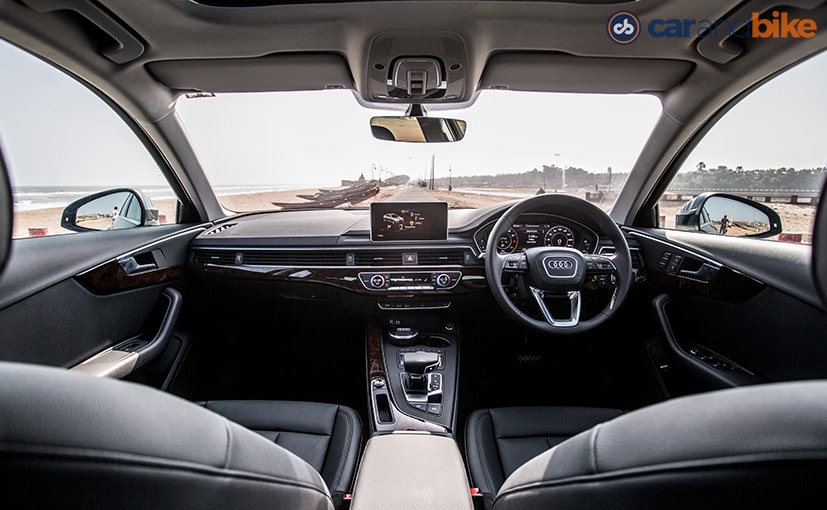 The HD screen gives you a clear view of navigation, infotainment and car information and there's place even for the speedo and tachometer. However, Audi has given no indication, whether it’ll come as standard equipment. Mind you, it's a different experience altogether, as the 7-inch screen on the dash hooks up your phone thanks to Apple CarPlay and Android Auto. Of course, there's Audi's own MMI interface, which is extremely user-friendly. 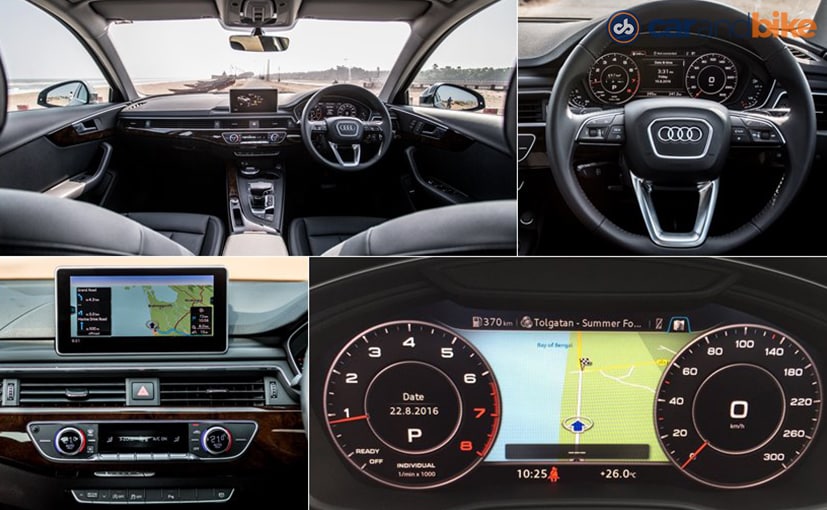 Adding more convenience is the longer wheelbase, which now stands at 2820mm - longer by 12mm, so there’s more legroom for the passengers seated at the rear and the scooped out backs of the front seats translate into some more room too. However, for a 6-footer, like myself, there wasn’t much headroom, thanks to the sloping roof; but overall it's a one up, above its predecessor. It also comes with a 3-zone climate control system, given that the people at the rear are very important; and that is because the A4 will be a chauffeur driven affair. Well, but is it better on space than the Skoda Superb or the Toyota Camry? No, it isn't. Then again in that segment, no one beats both these premium sedans on space.

Under the hood, however, we see a massive change and one that was unexpected for India. In fact, the folks, at Audi India, pushed hard to get this engine out first, which is why we'll see the 1.4-litre petrol engine make its way here. The engine has been downsized and so we'll no longer have the 1.8-litre version. 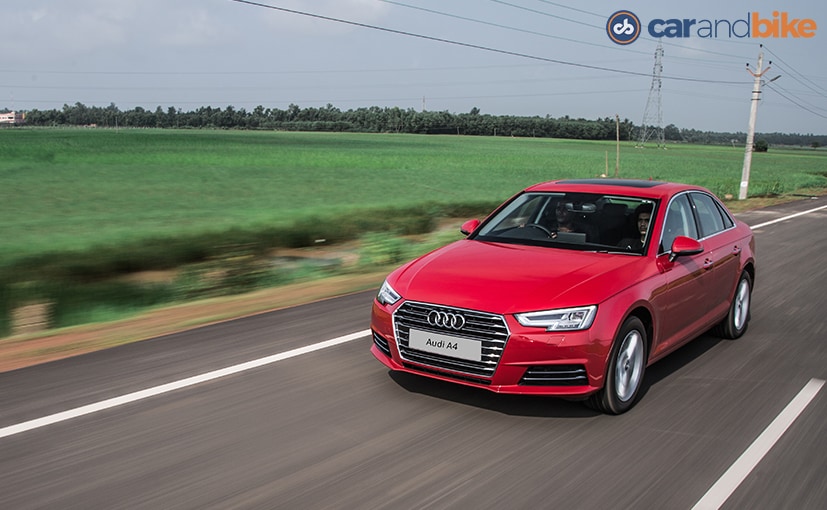 New Audi A4 Comes With the 1.4-litre Petrol Engine

Audi India managed to fast track the launch of the new A4 with the 1.4-litre petrol, which now has 150hp on offer. Yet, there'll be those who'll say that is that enough power? Well. Yes, it is! There's no hiding the fact that 18 horses have left the stable and it's got less torque as well (70Nm less), but there's no denying that the car does what it does best. It’s a sophisticated unit, where the exhaust manifold has been integrated into the cylinder head with very high-pressure fuel injection and separate cooling circuits for the crankcase and cylinder head, so it shouts performance as well as efficiency. The folks at Audi claim that the new A4 can deliver more than 17 km/l and that's close to most hatchbacks and sub-compact diesel sedans in our country.

Plant your foot on the accelerator and you'll see the 7- speed Dual clutch transmission work overtime, to adjust to your needs. There's no delay in pulling power - the 250Nm is available from 1500rpm and it cruises along. Put it into the sports mode and the dynamics change, but it doesn't go mental. It's like Jeeves in more ways than one, suave, sophisticated and delivers the punch at the right time.   This proves that it does well when you put it into a corner too, but it doesn't exude the same fun as either a 3 series or even a Jaguar XE. For the most part of the journey, you don't feel the need to intervene with the gearbox, by using the paddle shifters; however, when you do, the shifts are precise and add to the delight of the drive. Gear shifts are seamless and the low-end torque makes things even better, by handing you power on a platter. 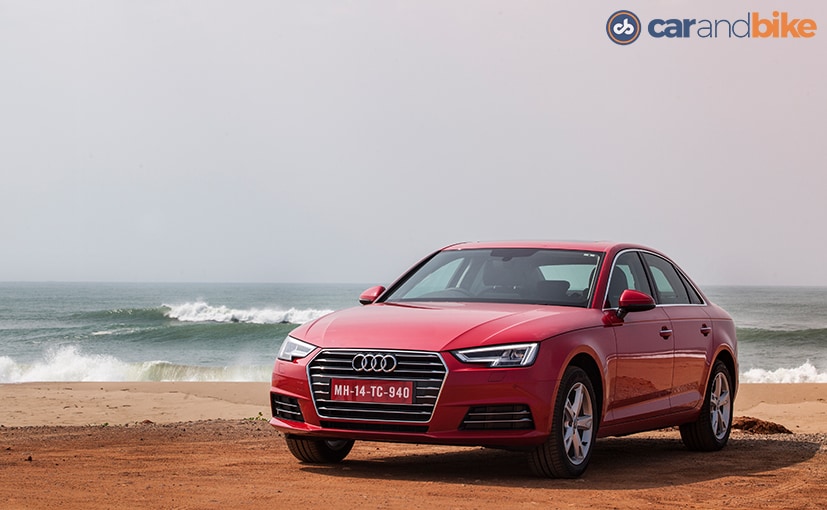 New Audi A4 Gets 8 Airbags

Cabin noise is curtailed thanks to better insulation. This is achieved as a result of extremely refined transmission, as also the sound-deadening acoustic glass used on the front windows. The A4 is a new look, a new feel and a breath of fresh air coming from Audi. It might not be great on looks, but it has been built superbly inside out. There are 8 airbags on offer; but again, we don't know if that's part of standard equipment. 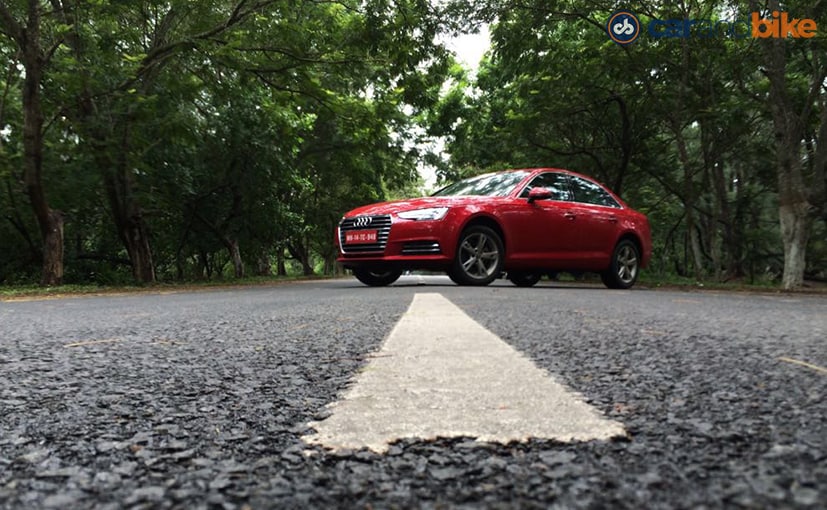 Considering that the car will be assembled locally, at the company's Aurangabad plant (which it shares with Skoda) and the downsized engine, people might think that it'll be cheaper; however, considering the amount of equipment that Audi has packed in, it does not look like it. While the folks at Audi refused to give out a figure, we expect it to be pricier than its predecessor. That said, it will not cross the ₹ 40 lakh mark. There's no doubt Audi has upped its game and with the company looking to go big in terms of dealership network and experience,  it will yet again cash in on being the first out there with an up-to-date car.