We were at Triumph's Adventure Experience Centre in Wales, United Kingdom to attend a special off-road riding and training session, and I had both the Street Scrambler and the Tiger 800 XCA at my disposal. Read on to know more about this special experience. 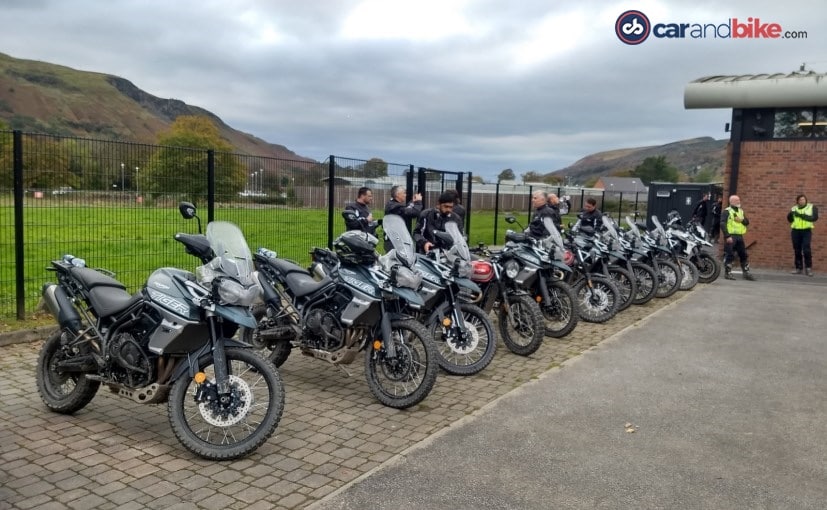 Adventure riding or simply going off-roading on a motorcycle is something that I had never done before. In fact, if you were to ask me a few weeks before I published this article, what adventure riding is all about, then the best you would have got from me is a spectator's view. Of course, that was up until recently when Triumph invited us for its special Adventure Riding Experience. So, here I was in Wales, United Kingdom, along with a couple of other Indian journalists and a group of other Triumph invitees from India and Brazil, to attend a special adventure riding and training session. Although I have been riding for over 10 years now, this was an all-new experience for me and I am going to share it with you here.

It all started with a short briefing session where the instructors walked us through the basics like, the riding gear we'll be using, the bikes we'll be ridding and the general route map for both the on-road and off-road course planned for the day. So, after we were all geared up, it was now time to see our bikes. For this adventure riding experience, the instructors had chosen two bikes for us - the Triumph Tiger 800 XCA and the Street Scrambler, and although I was very eager to start with the former, all the Tigers were already taken up by other participants, so I had to go with the Street Scrambler. A couple of kilometres on the bike and I wasn't disappointed. 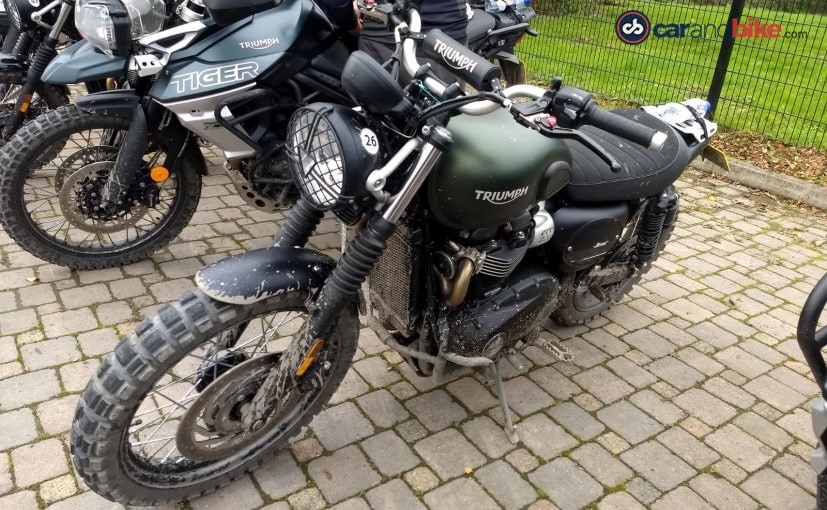 We started off from Triumph's Adventure Training Centre riding for about 10 to 12 km on the beautiful two-lane roads of Ystradgynlais, before we reached the off-road track. Located in South Wales at the foot of the Brecon Beacons, this specially selected mountain trail was going to offer us a multi-terrain riding environment including rocks, hills, gravel, and woodland. As soon as we reached the foothills, we were asked to put our bikes on off-road mode. While the new Tiger 800 has a dedicated off-road mode, which shuts off the rear ABS and traction control, in the Street Scrambler I had to manually shut both the traction control and the ABS completely, making things more exciting and a little bit scary for me.

After some basics on the dos and don'ts, it was time for the first lesson of off-roading - the 'Balancing Act'. One of the most important things to know before you do any kind of riding is to know the point of balance of your motorcycle, both when you are off it and on it. For this, we were asked to find the point of balance of the bike and let it stand on its two wheels while walking around it holding the motorcycle with just one hand at a time. Pro tip, keep it on first gear so the bike doesn't roll off. Lesson no.2 was - 'Walk the Bike' and here we had to learn how to properly use the clutch and accelerator. For this, the instructors asked us to start our bikes, put it on the first gear and walk with it in a circle. The idea here is to get the sync between releasing the right amount of clutch and gas so the bike moves without stalling. As you are not on the bike, the balancing act also comes into play. 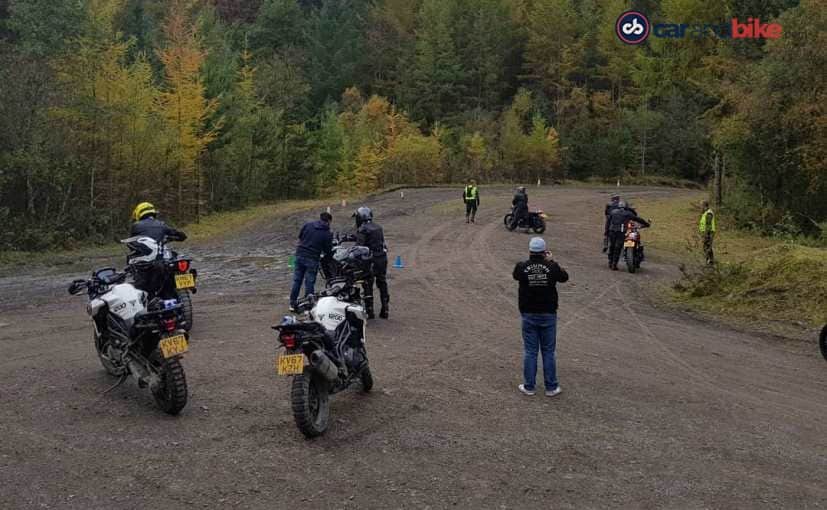 The next lesson was something that anyone who's familiar with adventure riding knows. Riding the bike standing on its foot pegs, and to do it right, I had to apply the first two lessons, and mind you, it's not as easy as it looks. The trick here is the get a secure footing on the pegs, hold the tank with your knees and steer the motorcycle not with your hands but with your legs, by mildly shifting your weight from left to right. This, I have to be honest, took me more than a few tries to get it rights, and after about 5-6 rounds around the practice trail, we were ready for the last and most important lesson, before we could go riding on these off-road trails. And that is braking. Yes, it's important to know when and how to brake, and for this, the instructor asked us to ride down a small hill at 15 to 20 kmph and jam the front brakes first and in the second attempt the rear brakes. The idea here was to know how the bike reacts on either of the two braking scenarios, and understand how to control it, finding the right balance, while riding standing on the foot pegs. 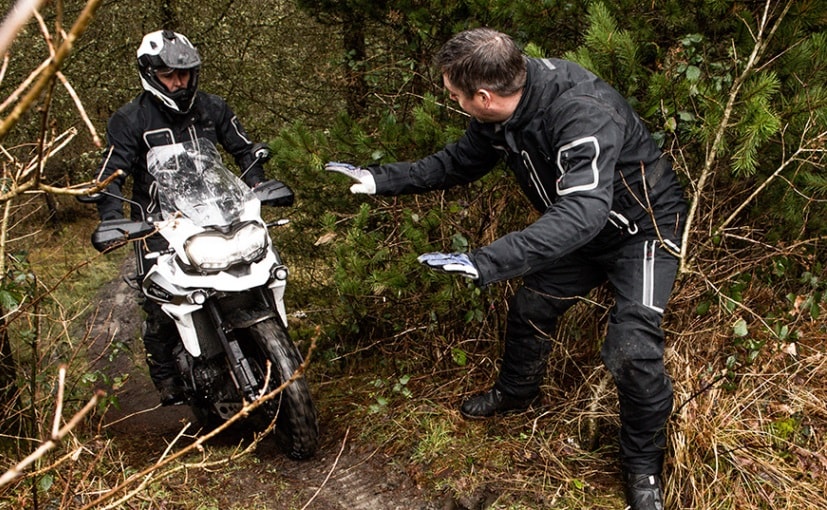 Now, it was time to put all these lessons to test and, our instructors already had a diverse off-road trail planned for us, which involved going uphill and downhill, riding on gravel, and through the mud. The Street Scrambler did its part perfectly and the bike nowhere felt out of place. The 54 bhp 900 cc liquid-cooled parallel-twin engine was more than enough to push the bike through these rough terrains, feeling very eager even at the slightest twist of the throttle. In fact, for the most part of it, I was in the first gear and the taller gear ratio was a big help here. 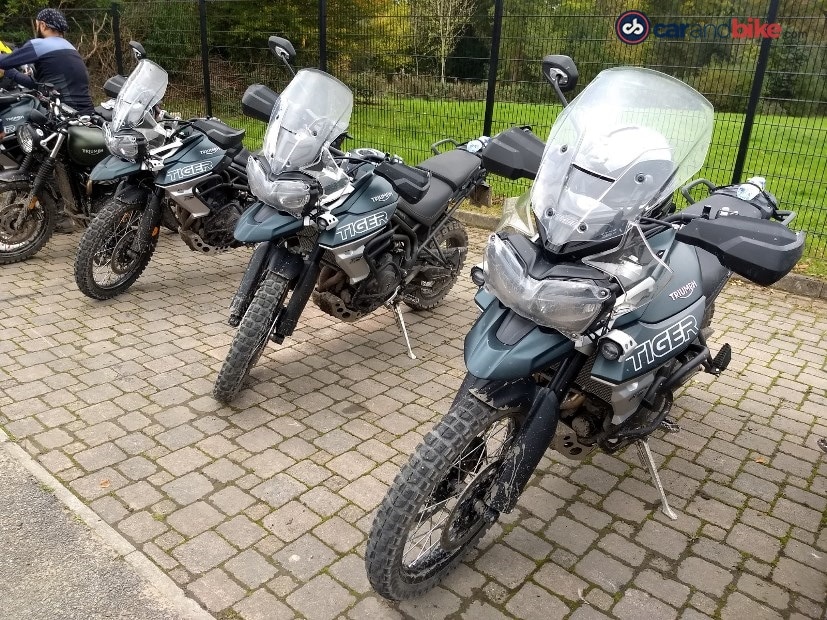 Despite being more powerful, heavier, and taller, the Tiger 800 felt like an easier machine to handle

After completing a few of laps around the trail, it was time to head on to the next leg of the off-road riding experience, which involved riding through some less rough and wetter terrains, as the route had some small water streams. For this part, I switched my Street Scrambler with a fellow rider for his Tiger 800 XCA, which let me tell you was a different machine altogether. Unlike the Street Scrambler, which was eager at all moments, the Tiger felt a lot more composed, frankly, less of a hooligan, despite being way more powerful at 94 bhp. The 800 cc liquid-cooled, in-line three-cylinder engine was a complete treat, in fact, despite its over 200 kg weight and taller seat height, it felt like an easier machine to handle. 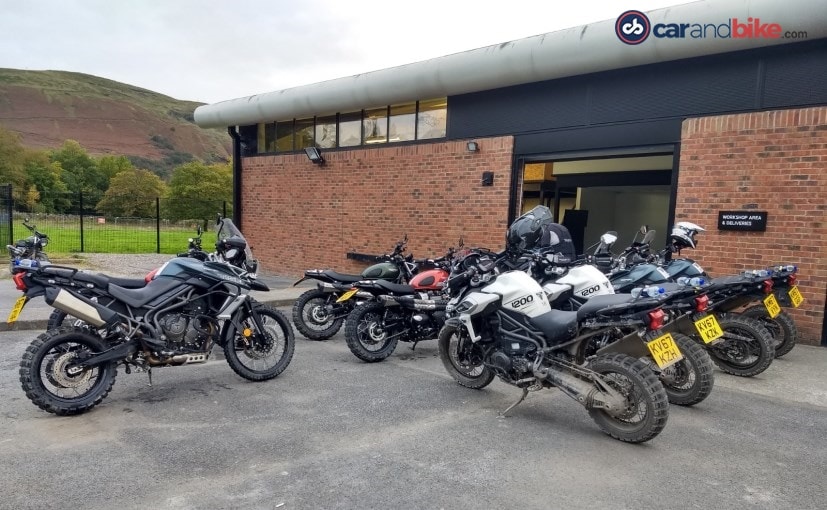 It was now time to head back to the Triumph Training Centre, and while riding back with the group is when I wished I had tried off-roading much before. Luckily for me, India too has more than enough adventure trails for both mild and hardcore off-roading and it won't be long before I go on exploring some of them.