Japan's biggest automaker plans to roll out 100 hydrogen fuel cell buses to shuttle visitors between venues, a stepping stone to a big ramp up for the Beijing Winter Olympics in 2022. 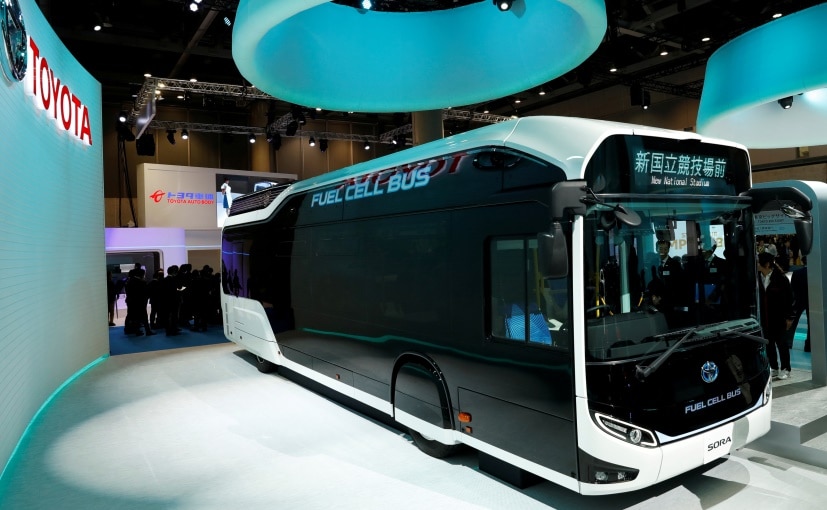 Buses may not be the most glamorous mode of transport but at the 2020 Tokyo Olympic games, they will represent Toyota Motor Corp's best bet for wider acceptance of hydrogen power - technology so far eclipsed by electric vehicles.

Japan's biggest automaker plans to roll out 100 hydrogen fuel cell buses to shuttle visitors between venues, a stepping stone to a big ramp up for the Beijing Winter Olympics in 2022.

There, more than 1,000 buses are planned in partnership with Beiqi Foton Motor Co, according to people familiar with the project, which aims to make the most of a push by China to start adopting the zero-emissions technology.

The plans to promote hydrogen with its exclusive Olympic 'mobility' sponsorship deal - one Toyota holds until 2024 - underscore its determination to keep backing the technology. That's despite an increasing number of electric cars on the road and Toyota's own efforts to speed up EV development.

But its reliance on buses for hydrogen publicity also highlights the lack of traction for its fuel cell cars, and the risk that hydrogen-powered transport may never be more than a niche market despite a quarter century of development and Japanese government backing.

Toyota has sold fewer than 10,000 of the Mirai, a fuel cell sedan it touted as a game changer at its launch five years ago. Costing consumers about 5 million yen ($46,200) in Japan after subsidies, it is one of three fuel cell cars available to consumers. Hyundai Motor Co sells the Nexo, while Honda Motor Co Ltd leases out the Clarity.

By contrast, Tesla Inc sold 25,000 of its all-electric Model S sedans in its first year and a half.

The disappointing Mirai sales reflect insufficient refueling stations, consumer worries about resale values and concerns over the risk of hydrogen explosions. A hydrogen tank blast in South Korea that killed two in May was followed by another at a Norway hydrogen station in June.

"Hydrogen still has this image of being dangerous - that it might explode - and our aim with the Olympics is to erase this image," Masaaki Ito, Toyota's general manager of its Olympic and Paralympic division, told Reuters.

The company will also provide 500 Mirai sedans to ferry officials between venues at the Tokyo Olympics. "We want to expose the technology to as many people as possible."

Toyota, which is also developing fuel cell delivery trucks and big rigs, has not disclosed how much money it has poured into the technology but it has been emboldened by support from the Japanese government, which sees hydrogen as a key way to reduce its reliance on oil.

Both envision a "hydrogen society" where homes, trains, ships, and even lunar rovers can be powered by fuel cells that turn the invisible, odorless gas into electricity.

The city of Tokyo, which will showcase the Olympic village for athletes as a hydrogen society in miniature, is buying most of the buses for its Toei municipal transport service, with 15 already in operation.

Unlike cars, buses have fixed routes, making it easier to plan fueling stations and give them a shot at being profitable.

Local and national government subsidies cover 80% of the cost, bringing them in line with the 23 million yen ($213,000) price tag for a regular diesel bus, a Toei representative said.

But lofty government goals remain unmet. Three years ago, Japan declared that by 2020 it wanted 40,000 fuel cell vehicles on the road and 160 hydrogen fueling stations in operation.

Today, just 3,400 fuel cell vehicles have been sold in Japan and it has 109 hydrogen stations.

Though vital for fuel cell cars to catch on, the stations are not easy to build, costing five times as much as a gasolin

e stand. Due to stringent safety regulations, they also require large plots of land which are in scarce supply.

Yet for all the slow progress, some analysts don't fault Toyota's pursuit of hydrogen power, pointing to China's backing of the technology and its vast auto market.

"China is actually moving ahead a lot faster and although they suffer the same issue with lack of refueling infrastructure, China has shown in the past that they can get infrastructure done pretty quickly," said Janet Lewis, head of Asian auto research at Macquarie.

For the Beijing games, Toyota will supply powertrain components for the Foton buses. They will be emblazoned with "Powered by Toyota" branding during the event, the sources said, declining to be identified as the plans have not been made public.

Toyota said the number of fuel cell buses for the Beijing Olympics has not been decided and that branding would be up to Foton. Foton did not respond to requests for comment.

The project with Higer will likely have a fleet of 20 buses ready for deployment in early 2020 whereas FAW plans to have its first prototype ready by the end of the year, said Audrey Ma, a director at Shanghai ReFire Technology Co, which is doing the system integration.

Outside of China, the only other similar deal Toyota has announced is one to supply fuel cell systems to Portugal's Caetanobus.

Although the technology remains unprofitable, Toyota says costs will fall with scale. It is building new fuel cell stack and hydrogen tank factories so it can lift production of fuel cell vehicles to 30,000 a year.