Nitin Gadkari, a passionate advocate for electric vehicles, said the government wants to encourage cycling as a healthy mode of transportation. 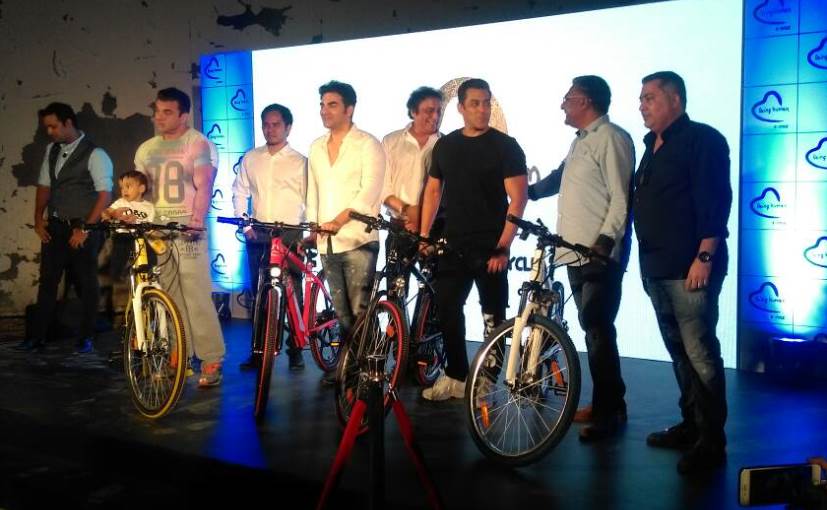 View Photos
Salman has discussed the issue with Gadkari and is looking into aspects of manufacturing e-cycles.

You could soon see Bollywood superstar Salman Khan pedalling on the newly-built cycle track on the Delhi-Meerut Expressway, promoting a healthy lifestyle as the brand ambassador of the government's initiative to popularise e-cycles. Modi cabinet's 'go-getter' minister Nitin Gadkari, a passionate advocate for electric vehicles, said the government wants to encourage cycling as a healthy mode of transportation. An e-cycle, which comes equipped with a small electric motor, can be used to cover greater distances than plain bicycles.

"Salman Khan has discussed the issue with me. He is also looking into the aspects of manufacturing e-cycles. It will create huge awareness among the masses," the road transport and highways minister told PTI.

The 'Being Human Foundation' of Salman Khan, an avid cycler himself, is in talks with e-cycle manufacturers for a tie-up, sources said.

The minister said some two to three years back when he started talking about environment-friendly fuel, people thought he was nuts, but now they are beginning to realise its advantages.

"Bringing e-vehicles besides other environment-friendly fuel is my dream," the minister said.

Gadkari said the first leg of the Delhi-Meerut Expressway, which includes India's first 14-lane highway, has a 2.5-metre wide cycle track and is set for launch any day now after being completed in record 14 months as against the scheduled 30 months.

Prime Minister Narendra Modi on December 31, 2015 had laid the foundation stone of the ₹ 7,566 crore expressway, saying it will bring people "freedom from pollution", the way Meerut showed the way towards freedom in 1857.

The minister said almost all new highways and expressways will have separate cycle tracks and people will be encouraged to use those for last mile connectivity, thereby benefiting them health-wise as well.

"I appeal to the countrymen to use bicycles as much as possible. It has huge health benefits and will go a long way in minimising vehicular pollution. We have already proposed to make cycle tracks on all major roads across the country, including on highways. I am doing this in my constituency Nagpur also," Gadkari said.

He said cycling is the best form of transport to curb vehicular pollution and the government will not lag behind in creating world-class infrastructure for it, matching advanced countries.

"In five years, I think we will be at par with advanced nations," he said, adding when people in countries like Netherlands could do this, why not those in India.

The image of a smiling Prime Minister Modi sitting on a bicycle, an unusual gift from his Dutch counterpart Mark Rutte, in June this year is still fresh in public memory. Rutte, 50, who usually pedals to work, had praised Modi for sustainable initiatives like 'Clean India' and 'Make in India'.

In Netherlands, known as the flower shop of the world, cycling is a way of life with 18 million bicycles for just 16 million inhabitants, as per the Dutch government.