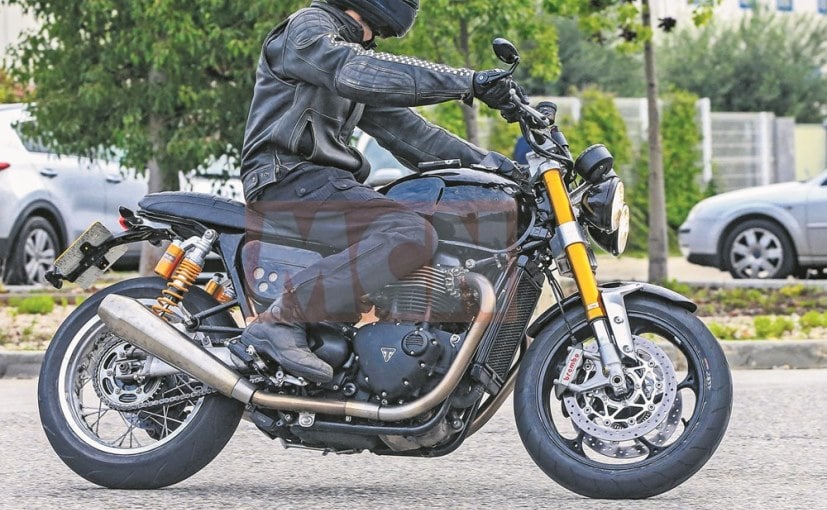 Triumph's new Bonneville range has certainly garnered rave reviews and the UK based bike maker is now looking forward to expand its line-up - all of five models and more - with yet another motorcycle. As the latest spy shot indicates, it seems that Triumph is planning to introduce a Thruxton R based street-fighter, which could resurrect the iconic Speed Twin badge when it hits the market.

The spy image reveals a new retro-styled naked motorcycle from Triumph currently in the prototype stage. The bike showcases mechanicals borrowed from the Thruxton R with power coming from the 1200cc parallel twin engine, while chassis comes from the new T120. You also see those legendary bug-eye twin-round headlamps from the 2007 Triumph Street Triple, but could be changed to more modern looking derivatives on the production ready version.

In addition, expect to see high-performance parts on the street-fighter from the Triumph Thruxton R including fully-adjustable Showa big piston forks at the front and fully-adjustable Ohlins twin shocks for the rear with braking duties handled by Brembo discs. Much like all Bonnies, the model will come with a host of electronics on board including Ride-by-Wire, multiple riding modes, ABS, traction control.

Triumph though will retain the retro look with the T120 throttle bodies covered up to look like carburettors. The riding position on the new naked looks upright with a tad bit of aggression, while the different wheels are specific to the prototype version.

Coming to the nameplate, Triumph recently re-registered the Speed Twin moniker recently, which was previously seen on a 500cc parallel twin cylinder motorcycle built between 1938 and 1966. The nameplate however, still remains speculative for the naked motorcycle.

This being only the first spy shot of many to come, we expect to know about Triumph's mystery street-fighter in 2017.