Nissan India let go of over 1710 employees during the previous financial year as part of a global downsizing exercise that will see over 12,500 employees being laid off by FY2022.

Japanese auto giant Nissan announced earlier this week that it will downsize its workforce globally by firing 12,500 employees. This includes the manufacturer's India operations as well. A report by ETAuto now states that over 1700 employees from the Indian subsidiary will be axed from the company, contributing 13.68 per cent to the total job cuts. However, Nissan India has clarified that the downsizing process has been completed in India and was a part of the 2018-19 financial year.

Back in September 2018, Nissan India had announced the Employee Voluntary Separation Scheme for its employees and this was part of the global downsizing exercise, according to the company. The manufacturer did say at the time that it was letting go manpower from its manufacturing vertical, where the need was less and instead would be looking to hire people for expanding the R&D efforts. carandbike reached out to Nissan for a quote on the layoffs but the manufacturer offered "no comments" on the matter. 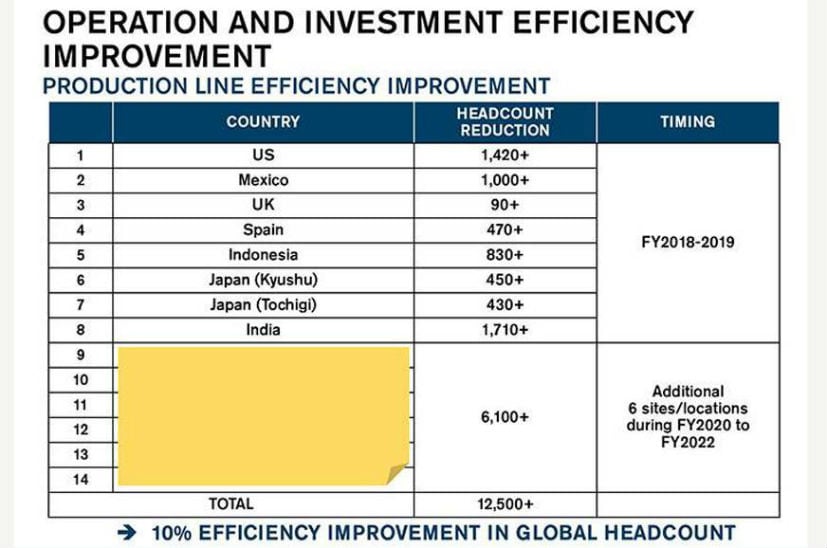 As part of the global downsizing or right-sizing exercise in FY2018-19, Nissan laid off over 1420 employees in the US, over 1000 employees from Mexico, 830 in Indonesia and about 880 employees from its two manufacturing facilities in Japan, according to the data provided by the company. That's about 6400 employees being fired in the first phase of layoffs, while the company will further reduce its direct workforce by over 6100 personnel across six additional sites between FY2020-FY2022.

The massive restructuring plan comes amidst a massive fall for the Japanese carmaker volumes and profits. The company's profits plunged 98.5 per cent to 1.6 billion yen ($14.80 million) for the first quarter of FY2019-20, it's worst since the loss in the March 2008 quarter during the global recession. Moreover, an ageing product portfolio, slowdown in several key markets including Japan, the US and China have further added to the company's woes.

Announcing the layoffs at the Quarterly Results press conference this week, Nissan - Chief Executive Hiroto Saikawa said that it was mainly targeting sites where the brand made investments to produce compact cars as part of the Power 88 plan. The plan was implemented globally in 2011 to revive sales that saw Nissan introduce 51 new car models with focused efforts to increase presence in emerging markets like India and Russia. The automaker also revived the Datsun brand as its new entry-level car brand to take on big wigs like Maruti Suzuki. However, Datsun barely managed to make a dent in the volume-friendly small car segment, which turned out to be big disappointment for the manufacturer. Apart from the workforce, Nissan will also axe its low performing products to realign costs and this includes a number of compact cars, possibly including those sold with the Datsun badge.

That said, India still remains a key market for Nissan. The carmaker has massively invested in its Oragadam-based facility along with partner Renault and still exports a major chunk of its production from the country. The alliance has collectively invested over ₹ 45 billion over the past seven years and the plant has an installed production capacity of 450,000 units per annum. The company currently holds a 0.75 per cent market share in India.