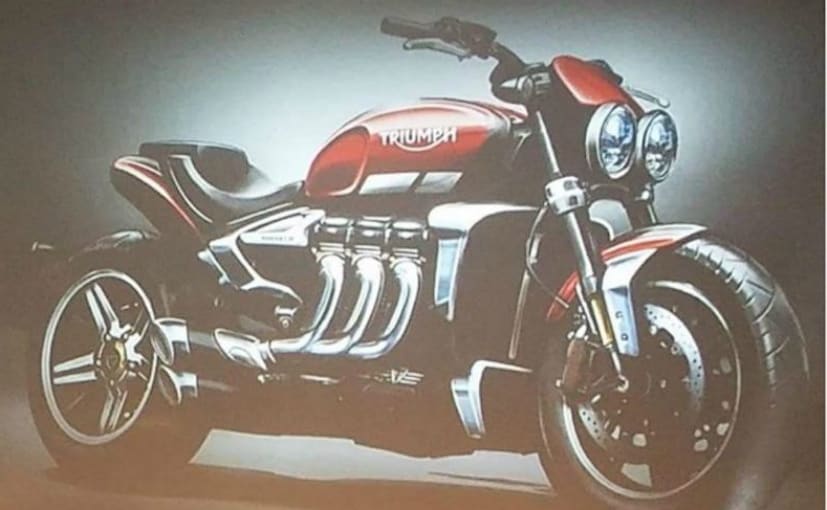 A new version of the 2.3-litre three-cylinder cruiser from Triumph may be launched in 2019, and an updated model may already be in the works, if pictures and information from a Triumph dealer conference are to be believed. A design sketch of a possible new model of the Triumph Rocket III was briefly flashed on the screen at the dealer conference which was held back in October. A bike, which may have been a prototype of the new model was also ridden across the stage, but it didn't stop and so there are no pictures available. So far, there's no concrete information, but the bike in question could be an updated model of the Triumph Rocket III, which was taken off production since it did not meet the latest emission regulations.

The 2019 Triumph Rocket is likely to get an updated, Euro-IV-compliant version of the 2,294 cc three-cylinder engine that's made the Rocket III the largest production motorcycle engine in the world. The last generation Rocket made around 148 bhp, so the new 2019 Rocket is expected to get a power boost, as well as more equipment, in terms of electronics. So, expect riding modes, traction control, and maybe even wheelie control. And power output could well surpass the 159 bhp peak output of the Ducati Diavel 1260.

At this point, there's no concrete information on what exactly Triumph is planning with the new Rocket, but from the design sketches, it seems likely that the updated bike will get a single-sided swingarm, upside down forks with radial Brembo calipers gripping the twin discs. The round twin headlights from the previous model will likely be retained, but the suspension could see a deviation, with a move from the twin shocks to a monoshock rear. So far, there's no news of a launch date, and the new model hasn't been spotted undergoing test runs anywhere as well. In all likelihood, more details will emerge by the second half of 2019, with a possible unveil in the autumn of 2019.