Honda's Marc Marquez took a dominant win in the 2019 Argentina GP with a lead of 9.8 seconds over Yamaha's Valentino Rossi who finished second, with Andrea Dovizioso of Ducati finishing third. After putting a spectacular fight in the first race of the season last month, Honda's Marc Marquez took a dominant win in the 2019 MotoGP Argentina Grand Prix. The rider completed the race with a massive lead of 9.816s over the rest of the pack, having led the race right from pole position. Coming in second was Yamaha's Valentino Rossi, going strong even as newer and younger riders take space on the grid. The Italian managed to pass Ducati's Andrea Dovizioso take P2, with each rider of the top three teams making it on the podium.

Marquez had a near perfect start to the race from pole and was quick to detach himself from the rest of the pack from Turn 1 of the opening lap. The Spaniard had a one second lead at the end of the first lap, which extended to over three seconds by Lap 3, and was at its highest at 12 seconds by Lap 10, as the race reached half time. While Marquez was untouchable at the front, it was the battle for second place that brought in all the action over the 25 lap race. 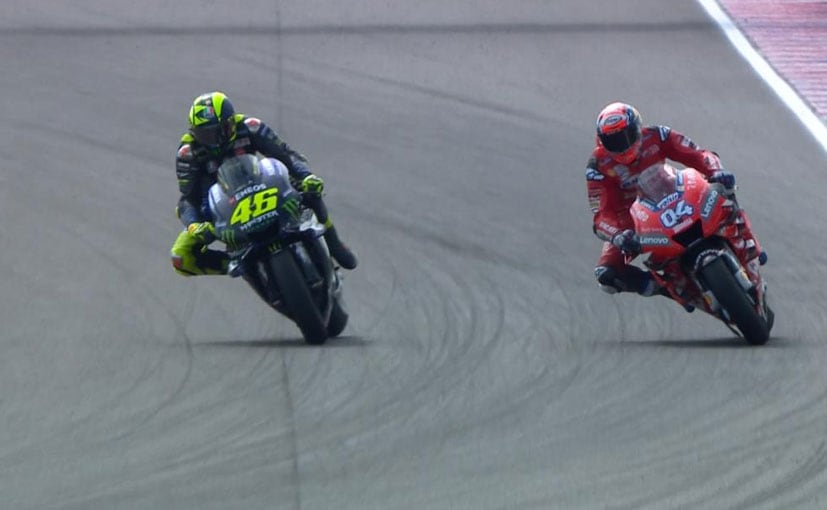 Rossi had as a good start as Marquez and was quick to take second place, but Dovizioso was quick to challenge the position. The Ducati rider crossed Rossi early on into second place after the Italian ran wide at Turn 5 on Lap 7. However, Rossi recovered to P2 once again a lap later and held on to the position for the new six laps. Dovizioso was hot on his tail and found a gap on Lap 13 but with Rossi still a close third. It wasn't until the final lap that the Yamaha rider managed to pass Dovi at Turn 7 to retake P2 and cross the chequered flag.

Coming in fourth was Pramac Ducati rider Jack Miller, 12.140s over the race leader, after a late pass on Suzuki rider Alex Rins who finished fifth. Factory Ducati rider Danilo Petrucci took sixth. Yamaha's Maverick Vinales though finished was expected to take seventh after a poor started pushed the rider from P2 to P4 and eventually P8 by the second lap of the race. The Spaniard, however was taken out by Petronas SRT Yamaha's Franco Morbidelli on the final lap.

Coming in 13th was LCR Honda's Cal Crutchlow who had a strong chance to be a podium contender but earned a ride-through penalty for a jump start that left him fending for 13th. The final point takers were Pramac Ducati's Francesco Bagnaia and Johann Zarco fo KTM. The last finishers were Tech3 KTM's Hafizh Syahrin followed by Aprilia's Andrea Iannone in 17th place.

Apart from Vinales and Morbidelli, the other riders to be involved in incidents including Tito Rabat and Karel Abraham crashing out and Suzuki's Joan Mir retiring in the pits.