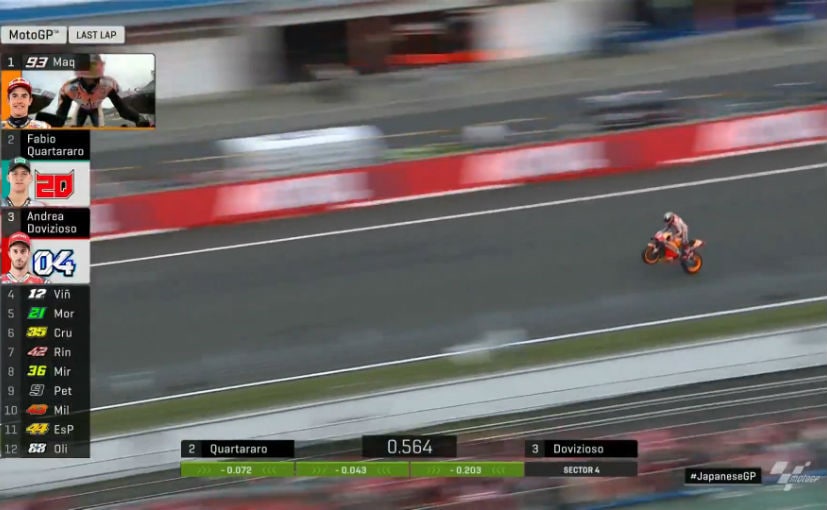 Marc Marquez secured his 10th MotoGP victory of 2019 handing the 2019 Constructors' championship title to the Repsol Honda Racing team with the Japanese Grand Prix. Fresh off claiming his sixth premier-class title win at Thailand in the last round, Marquez converted his pole position start into yet another victory, despite receiving resistance from Fabio Quartararo on the opening lap. The Petronas Yamaha rider went on to secure a second place finish in the race, mimicking the Thailand GP once again, while late charge from Ducati's Andrea Dovizioso saw him take the final spot on the podium. With the Japanese GP victory, Marquez equals Mick Doohan's record of 54 premier-class wins in MotoGP, while Honda has secured its 25th constructors' title.

It was a confident start for Marquez on pole, who claimed his title win at Motegi last year, but it was a strong start for Quartararo who started third and was quick off the line to grab second from teammate Franco Morbidelli. He now set his sight on the first-placed Marquez on the opening lap and made a bold attempt to pass the world champion at Turn 7, taking the lead. However, Fabio's lead was short-lived to just three corners as Marquez responded with an incredible pass at Turn 10, and never seemed to threatened again for the remainder of the race. 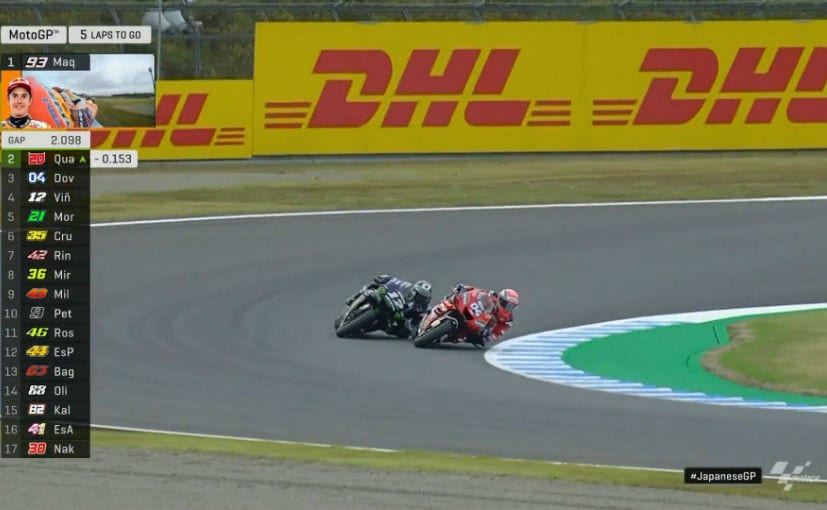 The second-placed Quartararo was close enough though, keeping a distance of around one second for the first half of the 24 lap race. In the latter stages though, he managed to reduce that time further, trailing  0.870s behind Marquez at the chequered flag. The Petronas rider remained unchallenged for most of the race, but did face heat in the closing stages with Dovizioso breathing down his neck. The Ducati rider started seventh on the grid and managed to move up to P5 on the first lap and then went on to pass Pramac Ducati's Jack Miller and Morbidelli in the following laps and held on to P3, finishing 0.455s behind Quartararo.

Yamaha factory rider Maverick Vinales turnd out to post the best result for the team as he slipped to fourth after briefly challenging Dovi for the podium finish. Morbidelli looked secured in fifth place at the start of the race, but dropped down to sixth after LCR Honda's Cal Crutchlow made an attemptin the final stages to take fifth from the rider. Suzuki's Alex Rins finished seventh, under a second behind Crutchlow, while teammate Joan Mir finished at P8 ahead of Ducati's Danilo Petrucci and Miller. 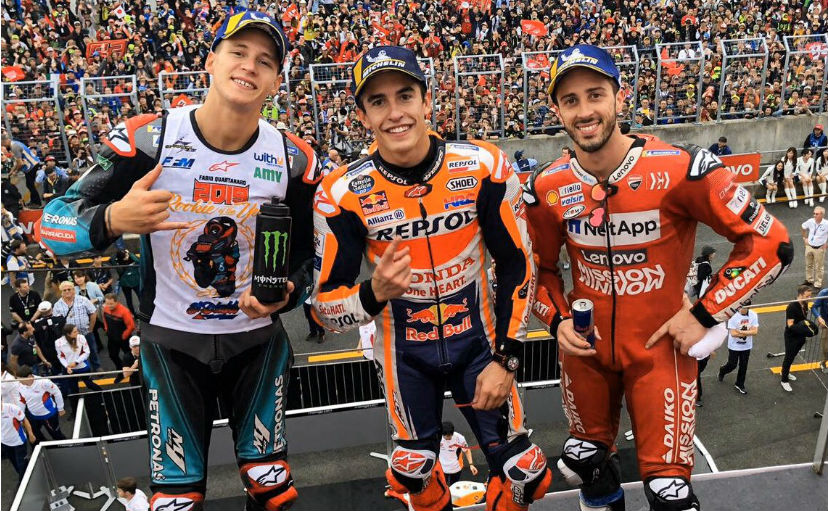 On the podium - Marc Marquez, Fabio Quartararo and Andrea Dovizioso

Yamaha's Valentino Rossi had been running 11th when he crashed on Lap 21, resulting in a DNF, his first since the Dutch GP in June this year. The incident promoted KTM's Pol Espargaro to 11th, while teammate Mika Kallio secured his first points for the team in 14th place, as a replacement for Johann Zarco. KTM's Miguel Oliveira  finished in 12th place followed by Pramac Ducati's Francesco Bagnaia.

Aleix Espargaro of Aprilia took the final point in the race, while LCR Honda's Takaaki Nakagami could finish only 16th in his home race, ailing from a shoulder injury. The rider is due for a surgery soon and this was his final outing this season. Repsol Honda's Jorge Lorenzo had a disappointing run in 17th place, a stark contrast from Marquez's performance through the season. The final finishers were Karel Abraham of Avintia Ducati, Hafizh Syahrin of Tech3 and Suzuki's wildcard entry Sylvain Guintoli. Apart from Rossi, Aprilia's Andrea Iannone was the only other retirement in the Japanese GP.