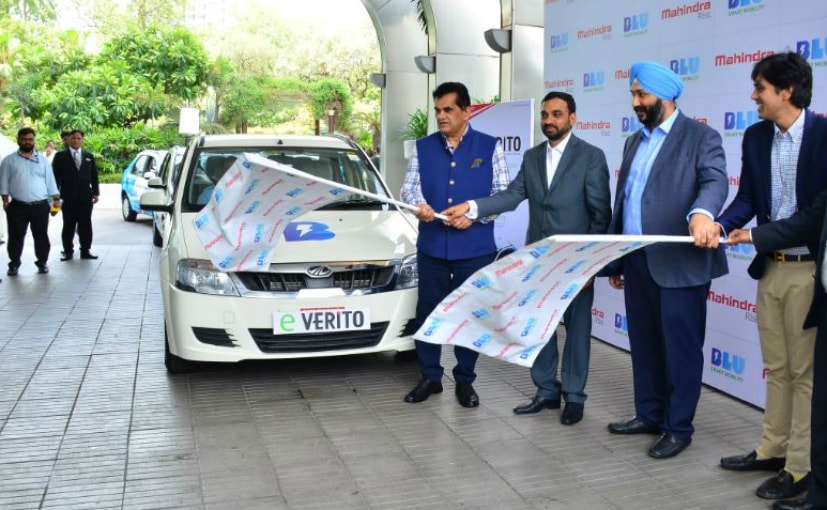 All-electric cab hailing service Blu Smart has flagged off the first 70 Mahindra eVerito sedans in the company's expansion in the Delhi-NCR region. These 70 electric cabs will be available across Delhi, Gurugram, Noida, Greater Noida, Ghaziabad and Faridabad. Blu Smart will add 500 more Mahindra eVerito electric sedans by April 2020, and further expand to other cities like Mumbai and Pune. Citizens of Delhi/NCR will be able to book the all-electric rides using the Blu Smart Mobility app (available for download on Android devices and coming soon for Apple iOS users).

"Mahindra's electric vehicles have already crossed the landmark figure of 130 million electric kilometres, which in turn has helped to save over 11,000 metric tons of CO2 emissions across the country. Today, we are proud to flag off our zero-emissions, all-electric Mahindra eVerito sedans and make them available on the Blu Smart App. This marks another big step forward in the electric mobility revolution in India. Our partnerships with fleet operators are aimed at increasing the large-scale adoption of electric vehicles in the country, helping bring a positive change in consumer's daily commutes," said Mahesh Babu, CEO, Mahindra Electric.

"Today's announcement is the first step towards transforming the way Delhi will commute. Blu Smart is bringing together the world's most innovative mobility concepts under a single mobility platform - RideSharing, CarSharing and SharedCharging. We are delighted to induct Mahindra eVerito to our ridesharing fleet and are committed to have 500 Mahindra eVerito premium electric sedans in our fleet by April 2020. By August 2019, we will have 65 charging stations in the National Capital which will be strategically located based on traffic heavy routes," said Punit K Goyal, Co-Founder, Blu Smart.

Blu Smart has strategically installed 15 charging points in Delhi-NCR, which in turn has helped the Mahindra eVerito achieve daily runs of as much as 180 kilometres. Blu Smart has also been able to achieve a range of 187 km with a single charge on its premium Mahindra eVerito fleet on the Delhi-Jaipur highway. Fifty more charging points are planned to be operational by August 2019, which will also include setting up of charging points on major national highways such as Delhi-Jaipur and Delhi-Chandigarh. Blu Smart will also start long-distance inter-city, all-electric rides soon.

Tata Zest
₹ 5.82 - 9.18 Lakh *
View More
Subscribe to Our Newsletter
Over 1.5+ Lakhs subscribers
Thank you for Subscribing to Us