Kawasaki may be working on a camera-based adaptive safety system, along with using radar for future motorcycle models, as latest patent images reveal. 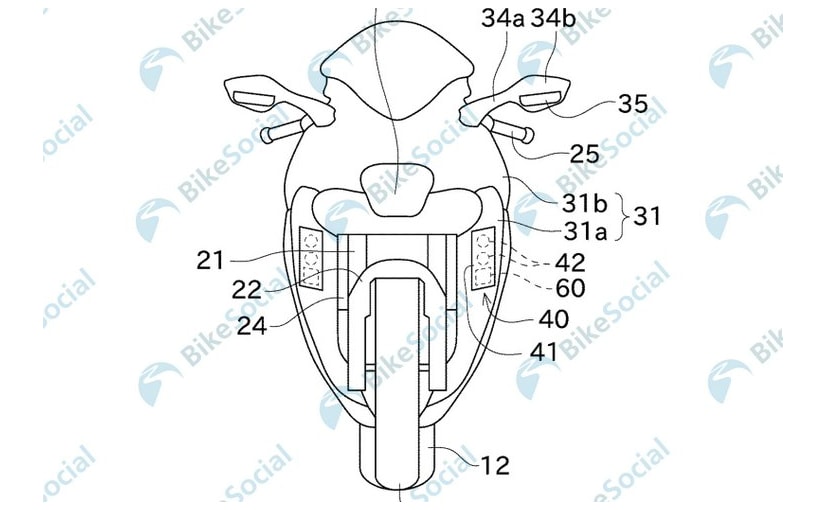 Latest patent application images indicate that Kawasaki may now be working on a camera-based adaptive cruise control system, in addition to radar-based adaptive cruise control systems which many manufacturers seem to be exploring. The new patent images show how Kawasaki plans to put two cameras on the fairing, one in each side, where Kawasaki intends to install cornering lights on the fairing's front edges. The cameras can be set behind the same outer lenses of the cornering lenses, as labelled '60' in one of the patent images.

And unlike radars, which need to be mounted right on the nose with no obstacles in front, the cameras can be made to work when fitted in this position. Kawasaki's patent also explains that the cameras can be used along with a nose-mounted radar like the Bosch system that it is expected to adopt in the near future, to give a safety system with the benefits of both technologies. Last year, Kawasaki's patent images revealed a radar-based safety system which uses radar to predict behaviour of other vehicles on the road and control anti-lock braking system (ABS) and throttle control in case the system senses a possible collision. That system was illustrated in images of what seemed like a Kawasaki Versys. Both radars and cameras have their own advantages. Radar is useful in low-light and low-visibility conditions. But the advantages of a camera-based system are that, when aligned with the right software, cameras are better at recognising the difference between vehicles and roadside objects, as well as distinguishing which lane a vehicle ahead is in. Cameras also are expected to act quicker than radar, and also distinguish between lit brake lights of a vehicle ahead, giving a useful early warning before they actually begin to slow down. To allow camera-based vehicle detection systems to work properly, two cameras are required, set at a fixed distance apart to give a stereoscopic view. This is what Kawasaki's latest patent images show.

Radar-based safety and warning systems are likely to make it to production bikes sooner than the camera system. Ducati is already working on a radar-equipped bike, and it's likely to be the upcoming Ducati Multistrada V4 which will have this system. KTM also will be fitting a radar-based Bosch system on one of its flagship adventure bikes which will likely be unveiled later this year.