The 2018 Hyundai Creta test mule was seen with some heavy camouflage and reveals a new set of alloy wheels. Hyundai India is expected to launch the Creta facelift later this year. 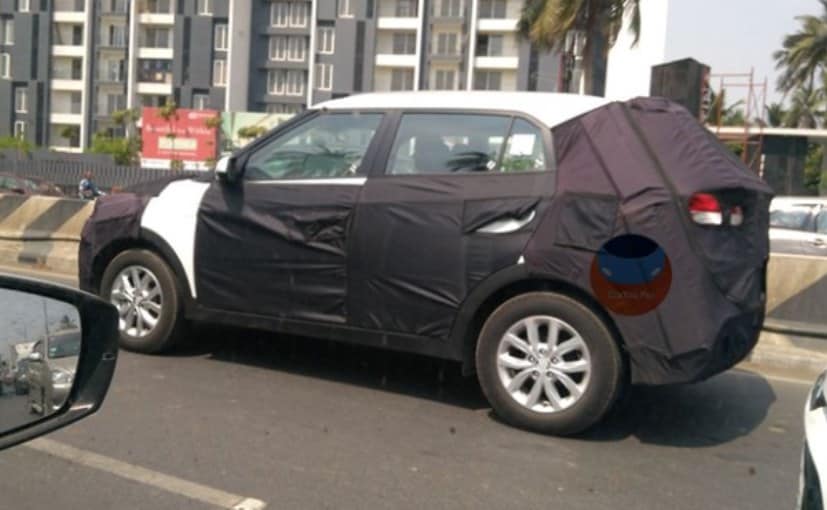 A prototype of the 2018 Hyundai Creta facelift was recently spotted testing in India. The car was caught on the camera by an enthusiast in Chennai, near Hyundai India's manufacturing facility in Tamil Nadu. The updated Hyundai Creta is expected to come with some cosmetic changes and a revised cabin with a few new features. This will be the first facelift for the car in India, which went on sale in the country in early 2015 and since then has been one of the top players in the compact SUV space with an average sale of over 9000 units a month.

The new spy images don't reveal much about the new Hyundai Creta facelift, apart from the fact that the SUV will get a new set of alloy wheels, which aren't as flashy the current ones. This could mean that Hyundai will offer two options of alloy wheels and while this will be for the mid-variants, the top-end model could get diamond cut alloys. Possible we might also see some revised character lines, but it's hard to tell right now with all that camouflage. Having said that based on the previously seen spy images of the SUV, we know that the car will come with a redesigned face, especially a new cascading grille in line with the carmaker's latest design language. The headlamps are also expected to see some revision along with a redesigned front bumper and new foglamps. The rear end of the car is also expected to come with some cosmetic updated mainly a set of taillamps and revised tailgate and rear bumper. The car will also get a revised cabin with new upholstery and updated dashboard, along with a new infotainment system with Apple CarPlay and Android Auto.

The engine option for the 2018 Hyundai Creta facelift is expected to remain unchanged and will continue to come with the existing pair of 1.6-litre petrol diesel engine and the smaller 1.4-litre diesel engine. All three engines come mated to a 6-speed manual gearbox as standard, but there is a 6-speed automatic torque converter also on offer as an option for both 1.6-litre petrol and diesel motors.

Hyundai recently launched the updated i20 facelift and i20 Active facelift during the recently concluded Auto Expo 2018. Last year, the company launched the new-gen Verna sedan and before that updated the Grand i10 hatchback and Xcent subcompact sedan, which makes the Creta facelift, the next big launch from the South Korean carmaker. Upon launch, the 2018 Hyundai Creta will continue to rival the likes of the Renault Captur, Duster, and the Jeep Compass.