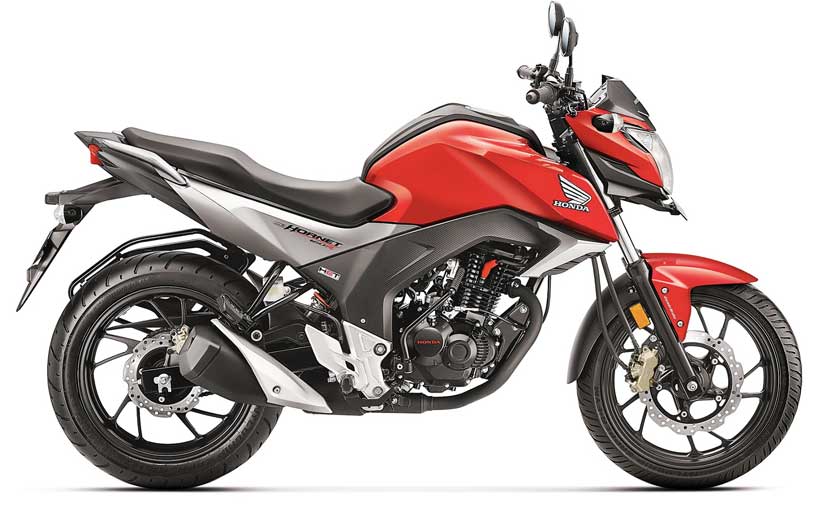 Overall, it's a sporty and handsome motorcycle, and will certainly attract attention to its target customer base - students and young executives. The headlight is sharp and edgy with two position lamps and upward facing side indicators. Then there's the LED tail light and forward leaning tank shrouds with carbon pattern tank cover adding muscle to the bike. There's a stubby exhaust lending additional muscle and covered by a brushed aluminium finished cover complementing a similar side panel.

Powering the Honda CB Hornet 160R is the same engine as the Honda CB Unicorn 160's - a 163cc single-cylinder, four-stroke engine, but it makes marginally more power at 15.7bhp and maximum torque of 14.76Nm. The engine is mated to a five-speed transmission and the engine also gets the Honda Eco Technology (HET), which HMSI says reduces friction among moving engine parts, delivering better performance and improving fuel efficiency. The engine also has a counter balancer to reduce vibrations.

The CB Hornet 160R comes fitted with a maintenance free battery and a viscous paper air filter which requires replacement only after 18,000Km. The Honda CB Hornet 160R's suspension comprises a telescopic front fork and a monoshock rear unit. Brakes are of high quality and the bike comes equipped with a petal disc at the front, and with Honda's Combined Braking System (CBS) as an option too.

Honda claims the bike also complies with BS-IV regulation norms and is one of the first motorcycles in its category to do so. The Honda CB Hornet 160R will be available in five attractive colours - Neo Orange Metallic, Pearl Amazing White, Sports Red, Pearl Siren Blue and Pearl Nightstar Black. The Honda CB Hornet 160R will compete against the likes of the Suzuki Gixxer, Yamaha FZ-FI series and the Bajaj Pulsar AS 150.