The Mahindra M5 Electro will be competing in Formula E Season 5 later this year and clocked over 102 km in its first test run. 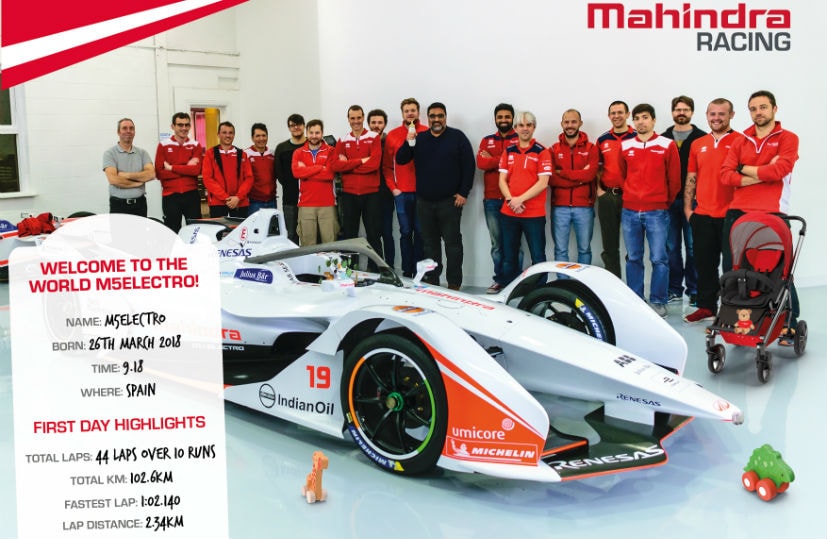 Mahindra Racing has released the first image of its Formula E Season 5 contender - M5 Electro. The all-new challenger is based on the Gen2 Formula E car that was revealed at the Geneva Motor Show 2018 earlier this month and replaces the outgoing model with its radical design, and improved performance. Mahindra, along with seven Formula E manufacturers completed a closed two-day test of their Season 5 cars at the Monteblanco circuit in South of Spain. The M5 Electro continues to wear the red and white paint scheme with the new design, and has been developed in collaboration with Pininfarina.

Apart from Mahindra,  Audi, DS, Jaguar, Venturi, Penske and Nissan all took first tests of their new Formula E Gen2 cars at the Spanish circuit. The new cars offer increased battery storage compared to their predecessor, which means the mandatory mid-race car swap will be eliminated completely starting with Season 5. The new cars are more powerful as well with power output pushed to 250 kw or about 335 bhp with 0-100 kmph coming in just 2.8 seconds. The potential top speed is 280 kmph on the new M5 Electro. In its first set of closed tests, the Mahindra M5 Electro racer was put to its paces by driver Felix Rosenqvist, who has two wins to his name this season. The car comes exactly a year after the M4 Electro made its debut and completed a total of 102.6 km in its first run. The lap distance was 2.34 km and the car clocked a fastest lap time of 1m02.140s. Mahindra says the M5 Electro is a result of over 3500 hours of labour.

The Formula E Season 5 will see a major overhaul with the new car and new rules upping the ante of the sport. There will be new manufacturers as well with BMW and Nissan to join the grid in the  all-electric single-seater championship. Apart from the new power unit and battery pack, the Gen2 cars also get new Michelin all-weather tyres that have been specifically designed for the electric street racer. The 2018-19 Formula E Season 5 will commence in November this year.