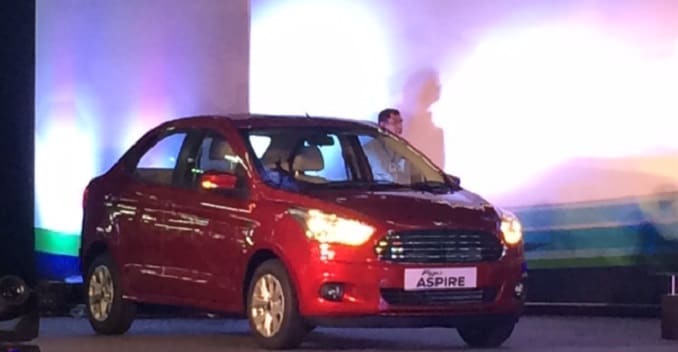 It is now a crowded yet rapidly expanding segment. And Ford Motor Co wants a piece of it. Ford's next product is the Figo Aspire - a new subcompact sedan to rival the best-selling Maruti Suzuki Swift Dzire and Honda Amaze - besides the Tata Zest & Hyundai Xcent.

The Figo Aspire was previewed as the Figo concept that was shown to us at the 2014 Delhi Auto Expo. It will also generate a similar product for other markets, however it is specifically for India that the car has been kept sub-four metres to attract the government's lower excise duty incentive.

The Figo Aspire will come with the 1.5-litre TDCi diesel and 1.2-litre TiVCT petrol engines. The car will come with features like Sync with AppLink  and Emergency Assistance which we've seen in the EcoSport. It will be offered with aggressive pricing and its market entry and actual start of production will be around mid-year.

Currently the company has already begun trial production of the Figo Aspire at its new plant in Sanand, Gujarat. The plan is that all current portfolio products will come from the existing plant at Chennai, while all new products will roll out of Sanand.

Both plants will export nearly half their production with new B and C platform cars being shipped to markets as varied as South Africa, Europe and Latin America. Ford will launch 3 new cars over the next 12-18 months. Besides the Figo Aspire, we will get the new Figo hatchback and the next generation of the Endeavour that has already broken cover in South-East Asia.

Ford has now doubled its capacity in India to 440,000 units and also has the capability to make over 600,000 engines here now. It says it will bank of China and India to drive its growth in coming years, and so products suited to these markets will be key to that success. Ford will also focus on bringing some of its global nameplates to India - and isn't ruling out the possibility of the Focus line of cars driving in.

Besides this it is also considering a flagship model like the Mustang, though that is not as big a priority as the new plant and the volumes products. It will expand its dealer footprint too, and says that its still working on ways to lower the cost of ownership for its cars. It now wants to be counted amongst the top players in the Indian market, and is eyeing a larger marketshare too once the new products arrive.