Lewis Hamilton is now closer to the world title winning the US Formula One Grand Prix ahead of Sebastian Vettel, while team Mercedes-AMG Petronas sealed the Constructors' championship for the fourth consecutive year. Lewis Hamilton took a step closer to the 2017 world championship title having won the Formula One US Grand Prix in Austin this weekend. The Briton beat Ferrari's Sebastian Vettel inching closer to what will be his fourth world championship. Team Mercedes-AMG Petronas sealed the Constructors' championship for 2017 with 575 points as against Ferrari's 428, taking home the win for the fourth consecutive year. While Hamilton and Vettel took the top spots, Max Verstappen of Red Bull finished third but was denied the podium after taking an illegal pass on Raikkonen on the last lap. As a result, the iceman secured a podium in the race. 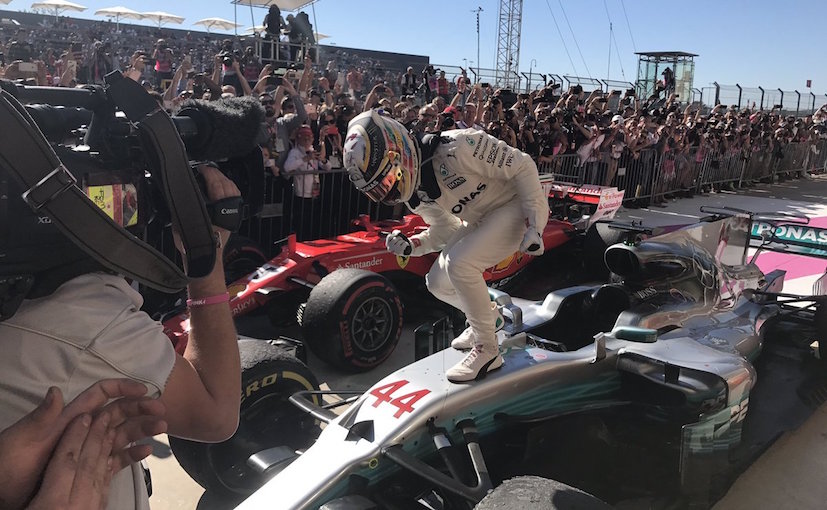 Hamilton also created a new record this weekend of having the maximum pole starts in F1, 117 times, breaking the previous record of 116 held by Michael Schumacher.

The Circuit of the Americas was every bit action-packed as one would hope for. Pole-sitter Hamilton lost the lead in the opening stages to Vettel with the latter leading the pack for the first five laps. It briefly looked like Vettel would take home the win, much Hamilton's annoyance. However, the Mercedes driver was in no mood of letting go of this win and moved to attack the Ferrari on Lap 6 to reclaim the top spot. While Vettel pitted on Lap 16 and shaved off 4.4 seconds from the gap behind Hamilton, it seemed Hamilton's lead was challenged. However, the Mercedes driver maintained the pace through the race and a single pit-stop strategy worked in his favour as he extended his gap with Vettel to over 10 seconds. By Lap 39, Vettel made his second pit stop and things certainly looked up for Hamilton. However, the German was pushed to P4 as a result, with Valtteri Bottas and Kimi Raikkonen fighting for second.

The Ferrari driver wasted no time in picking up the pace and charged behind Bottas on Lap 51, before passing Raikkonen for P2. Meanwhile, Raikkonen was defending his position from Verstappen, who made a remarkable comeback after starting 16th on the grid, due to engine penalties. The Dutch was aggressive in taking P3 over Raikkonen and passed the Finn driver in the long right-hander at the end of the last lap. (Verstappen made a remarkable comeback to P3, after starting 16th on the grid)

However, the stewards determined that Verstappen had left the track for gaining an advantage and was awarded a five-second penalty at the end of the race. The result was soon changed with Raikkonen promoted to P3, while Verstappen moved to P4. Bottas, on the other hand, took the fifth place with some brilliant driving. As for retirements, Daniel Ricciardo of Red Bull had an unfortunate end to his race after suffering engine problems early on, but not before putting up a great battle for third against Bottas. Nico Hulkenberg of Renault retired after suffering a loss of oil pressure, while McLaren's Fernando Alonso retired with an engine problem. Sauber's Pascal Wehrlein failed to finish after a contact with Magnussen in the early stages of the race.

With three races left to the finale, the championship title is closer to Hamilton than ever. However, as we've seen in the past, this year has been about flips at every corner and the celebration fireworks just can't lit yet at Mercedes. Hamilton leads the points table with a score of 331, followed by Vettel with 265. The Brit still needs nine points to secure the drivers' title. Both drivers will be putting their best at the upcoming Mexico GP next weekend with only 75 points to play for. Will Vettel be able hold Hamilton off till the Abu Dhabi finale? We certainly hope so.