There were a whole bunch of cars launched ahead of the festive season and the consumers were spoilt for choice. Here's a look at the top 10 launches. 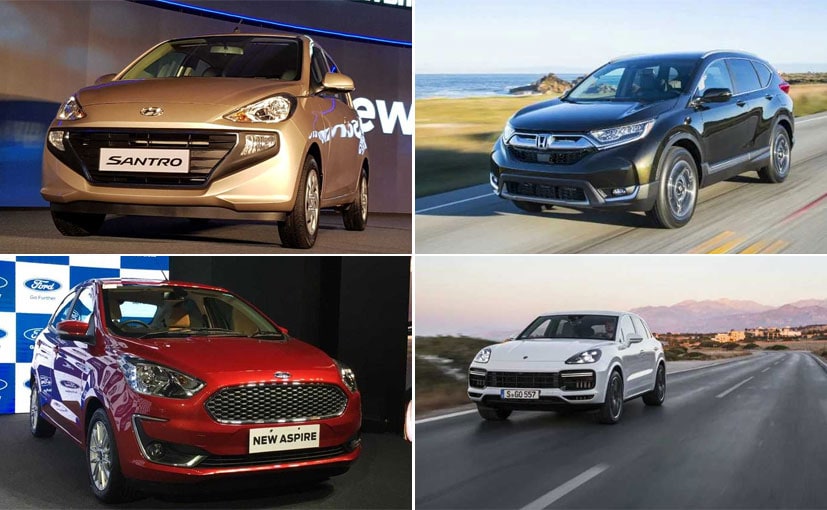 It's the festive season that automakers wait for all year long because they know that it's that time of the year when the volumes are going to go up and car buying decisions are going to be zeroed down upon. It is because of this reason that you see a flood of launches in the country just ahead of the festive season and this time around it was no different. There were new models, and facelifts, all of which were launched to give the customers a choice and the cars launched spanned a whole bunch of segments, making things interesting in the automotive market in the country. Here's our list of the Top 10 cars that were launched this festive season.

The 2018 Hyundai Santro was the most anticipated of launches of the year. There is a lot riding on the shoulders of the new model as there's a lot that has gone into its development. The company has invested over ₹ 700 crores in three years to develop the car. It's based on a new K1 platform which Hyundai says is 63 per cent more rigid than the previous one. The design of the new Hyundai Santro is not something radical but definitely fresh and in-line with Hyundai's family. Though Hyundai claims the Santro to be a tall boy, its 30 mm shorter than its predecessor. Inside it gets an upmarket cabin which has a 7-inch touchscreen infotainment system equipped with Apple CarPlay and Android Auto and a rear A/C vent which is first in segment. The New Hyundai Santro gets five variants- D-Lite, Era, Magna, Sportz and the top of the line Asta and also gets the option of a CNG along with the petrol. The Hyundai Santro is powered by a 1.1-litre, 4-cylinder, naturally aspirated engine, which makes 69 bhp of peak power and 99 Nm of peak torque when powered by petrol. The petrol engine is mated to a 5-speed manual or a new 5-speed AMT gearbox that has been developed by Hyundai in-house.

The 2018 Ford Aspire facelift has been launched in India at a starting price of ₹ 5.55 lakh (ex-showroom, Delhi). The company has made changes to the design of the car and it gets a new honeycomb mesh grille and new front bumper with handlebar moustache design on the sides. The 2018 Ford Aspire, like the pre-facelift model, will come with two petrol and one diesel engine option. Both the petrol engines are from the new dragon series - the 1.2-litre three-cylinder unit that was introduced with the Freestyle, and the 1.5-litre three-cylinder unit that was introduced with the EcoSport facelift. The former makes about 95 bhp and develops 120 Nm of peak torque, while the bigger 1.5-litre petrol unit offers 123 bhp and 150 Nm of torque. The 1.2-litre unit comes with a 5-speed manual gearbox as standard, while the latter comes equipped with the 6-speed torque converter. There's also the 99 bhp churning tried and tested diesel engine on offer and sadly there's no automatic on offer on the diesel. On the inside, the 2018 Ford Aspire hasn't received many changes but gets the new 6.5-inch floating touchscreen seen on the Ford Ecosport and Ford Freestyle. In addition to the latest SYNC 3 Microsoft command system, the new Aspire also gets me Apple CarPlay and Android Auto.

Tata Motors has launched the Tigor facelift just over a year after it was first launched in India. The 2018 Tata Tigor facelift is priced at ₹ 5.20 lakh for the base petrol, going up to ₹ 7.38 lakh (all prices, ex-showroom Delhi) for the range-topping diesel. In terms of design, there have been subtle cosmetic updates like the new double barrel headlamps with chrome inserts, a tweaked front bumper and new LED taillamps. Engine options on the Tigor facelift remain the same with the 1.2-litre Revotron petrol that produces 84 bhp at 6000 rpm and 114 Nm of peak torque at 3500 rpm. There's also the 1.05-litre Revotorq diesel that churns out 69 bhp at 4000 rpm and 140 Nm of peak torque available between 1800-3000 rpm. The engines are paired with a 5-speed manual transmission as standard, while an AMT is available on the petrol version.

The fifth generation Honda CR-V was launched in India at a price of ₹ 28.15 lakh, while the diesel 2WD model is priced at ₹ 30.65 lakh and the fully loaded top-spec diesel variant costs ₹ 32.75 lakh (all prices ex-showroom, Delhi). This is the first time that Honda is offering the CR-V with a diesel engine and in seven-seat configuration. The diesel Honda CR-V gets an all-new 1.6-litre Earth Dreams engine which makes about 118 bhp at 4,000 rpm and 300 Nm of peak torque at 2,000 rpm. The engine is mated to a new 9-speed automatic transmission which. The petrol engine is a 2.0-litre unit that makes 151 bhp at 6,500 rpm and peak torque of 189 Nm at 4,300 rpm mated to a CVT gearbox. The diesel engine model will have all-wheel drive as an option but the petrol engine model will only have front wheel drive.

The 2018 Isuzu MU-X facelift has been launched in India at a starting price of ₹ 26.34 lakh (ex-showroom, Delhi). The facelift has made the new Isuzu MU-X look more butch at the face. Up-front, it gets an even upright grille which is complemented with aggressive looking projector headlamps which also get daytime running lights. While the upper part of the face looks more angular, the lower part retains the edges from the pre-facelift model. The front bumper now hosts a wider air-dam and the fog lamps get darkened chrome eyebrow surrounds. The new MU-X  now rides on bigger 18-inch alloy wheels. Mechanically the Isuzu MU-X remains the same. Propelling the SUV is the same 3.0-litre diesel motor that churns out 174 bhp and 380 Nm of peak torque and is mated to a five-speed automatic gearbox as standard.  As before, the 2018 Isuzu MU-X is available with two transmission options which are a 4x2 and a 4x4. The four-wheel-drive system is the same Terrain Command system that is equipped with a shift-on-fly-dial which is the 4x4 engager.

The Mercedes-AMG G63 has now been launched in India in its newest avatar priced at ₹ 2.19 Crore (ex-showroom, India). The new generation Mercedes-AMG G63 stays true to its squared-off foundations with its chiselled body and straight lines but is now subtle and angular around the edges.On the inside, the new G63 gets new high-end interior that looks straight out of the S-Class and that is a good thing especially since the older G63 did have a rather old and dated interior package. The new Mercedes-AMG G63 is still based on a ladder frame chassis, still gets three options for a differential lock and still gets four-wheel drive with a low range gearbox. Under the hood, the G63 gets a 4-litre twin turbo engine, essentially the same that you also get on the Mercedes-AMG GTR, making 577 bhp and 850 Nm. The big brute of an SUV does 0-100 kmph in just 4.5 seconds. The new G63 is also now mated to the brand new 9-speed dual-clutch gearbox.

Porsche has launched the third-generation of the Cayenne in India priced at ₹ 1.19 Crore for the standard model. Prices for the Porsche Cayenne E-Hybrid start at ₹ 1.58 Crore and the Porsche Cayenne Turbo is priced at ₹ 1.92 Crore (ex-showroom India). The 2018 Porsche Cayenne SUV gets a host of upgrades over its predecessor including a revised chassis, and a separated link design for the front axle and a multi-link rear axle. The latter though is offered as optional, but further improves the agility on the car. Visually too, the Cayenne has evolved and gets a sharper look while retaining the overall appearance. The SUV now comes with the Porsche Dynamic Light System (PLDS) or LED Matrix Beam headlights, which also include PDLS. Capable of going off-tarmac, the third-gen Porsche Cayenne will be available in four modes - Mud, Gravel, Sand, or Rock. The car can be further tuned to change the drive mode, chassis settings, and differential locks to adapt to the terrain. The new generation Porsche Cayenne is offered with a range of engine options including V6 and V8. The standard version will use a 3.0-litre single-turbo V6 with 335 bhp and 450 Nm of peak torque, while the Cayenne S will draw power from the 2.9-litre twin-turbo V6 that produces 433 bhp and 550 Nm of peak torque. The 2018 Cayenne Turbo packs in 542 bhp and 770 Nm of peak torque from a 4.0-litre bi-turbo V8 engine, and is capable of hitting a top speed of 286 kmph. There will also be an E-Hybrid variant on offer.It will use the 3.0-litre V6 engine, which coupled with the electric motor will churn out a combined power output of 462 bhp and peak torque of 700 Nm. A newly-developed eight-speed Tiptronic S transmission is standard across the Cayenne line.