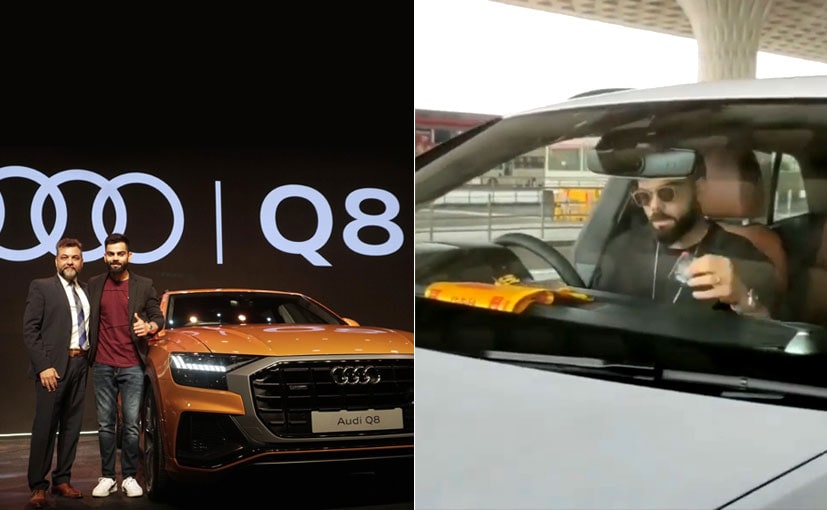 Indian cricket team captain Virat Kohli recently launched the Audi Q8, the German automaker's new flagship SUV in the country, and now the brand ambassador was recently spotted driving the model. The new Audi Q8 is a luxury crossover and is priced at ₹ 1.33 crore (ex-showroom) and is the newest  addition to his garage. Kohli is seen on the driver's seat as he stepped out of the model at the Chhatrapati Shivaji International Airport in Mumbai in a video surfaced online. The cricketer has had an envious fleet of Audi cars over the years right from the R8 coupe to the Q7, and the Q8 fits in well with the others.

Officially launched today and @virat.kohli is already seen driving ‘his' Audi Q8. Prices begin from ₹1.33cr ex-showroom for the 55TFSi 340hp petrol model and from what we hear, a few cars have already been delivered across the country. With the influx of these “sporty” SUVs, are we forgetting the OG go-anywhere-do-anything SUVs, namely, the G, Land Cruiser and the likes? What are your thoughts on the Q8? #Audi #Q8 #AudiQ8 #ViratKohli #Mumbai via @viralbhayani

The viral video indicates at a Carrera White finished Audi Q8 that is being driven by Kohli. The crossover comes with only a petrol engine in India with a 3.0-litre turbocharged V6 engine churning out 340 bhp of power and 500 Nm of peak torque. The motor is paired with an 8-speed automatic transmission that sends power to all four wheels via the Quattro all-wheel drive system. The Audi Q8 is a quick SUV and can sprint from 0-100 kmph in 5.9 seconds and has an electronically limited top speed of 250 kmph.

The 2020 Audi Q8 is positioned as the brand's flagship offering and comes to India as a Completely Built Unit (CBU). The SUV comes with Matrix LED headlamps, LED taillights, 22-inch wheels; a 10.1-inch MMI infotainment system, and the 12.3-inch Audi Virtual Cockpit. The car also comes equipped with the Audi connect data transfer module with the LTE Advanced standard and a Wi-Fi hotspot. Other features include - adaptive cruise assist, efficiency assist, crossing assist, lane change warning, curb warning, and 360-degree cameras. The Q8 takes on a number of rivals in this segment including the Range Rover Sport, Porsche Cayenne Coupe, BMW X6 and the Mercedes-Benz GLE Coupe.

With respect to Virar Kohli's garage, the cricketer's collection ranges from the Audi Q7, Audi R8 LMX, BMW 7 Series, Range Rover Vogue, Renault Duster and more. At the new generation Audi A6 launched event last year, the youth icon had revealed his first car was the Tata Safari and he had equipped the SUV with an aftermarket music system.