Both models are spawned by BMWs CLAR platform and will be sold in India as completely knocked down (CKD) units.

BMW's flagship models have finally gone on sale in India today. The BMW 7 Series Facelift has been launched at ₹ 1.22 crore going all the way upto ₹ 2.42 crore (ex-showroom India)  and prices of the X7 SUV start at ₹ 98.90 lakh, all prices ex-showroom India. The X7 is an all-new vehicle to join at the top of BMW's SUV line-up while the 7 Series has been in the market for a long time and the new model is a facelift of the outgoing car. Both being flagships, BMW wanted to keep few things in common and the most evident one is the massive signature kidney grille. It's the widest in the 7 Series and the tallest in the X7.

Both the models are spawned by BMW's CLAR platform. The 7 series  have been launched in India in six variants- 730Ld (diesel) trim and 740Li (petrol) trim, 745Le (plug-in Hybrid) and M760Li  while the X7 will be sold in the xDrive M30d (diesel) trim and xDrive 40i (petrol) trim. Having said that, the difference is just in the nomenclature and both models source their power from the same petrol and diesel engines. The 3.0-litre, in-line six-cylinder, twin-turbo diesel engine churns out 260 bhp and 620 Nm of peak torque in the 7 Series. Surprisingly, the 7 Series also comes with a plug-in hybrid variant which develops a combined output of 380 bhp and 600 Nm and boasts of fuel efficiency figures of 39.2 kmpl. The 7 Series 760 Li will be sold in India as a completely built unit (CBU) and gets a massive 6.5-litre, twin-turbo, V12 petrol motor that puts out 609 bhp at 6500 rpm and a whopping peak torque of 850 Nm at 1500 - 5000 rpm and can clock triple digit speed in just 3.8 seconds.

The BMW X7 is also powered by the same 3.0-litre, in-line six-cylinder, twin-turbo diesel engine which churns out 260 bhp and 620 Nm of peak torque. The 3.0-litre, in-line six-cylinder, twin-turbo petrol engine in the X7 produces 335 bhp and 450 Nm of peak torque. The X7 being a mammoth SUV which tips the scale at 2.3 tonnes. Both motors are mated to an eight-speed steptronic gearbox as standard in the X7 as well as in the 7-series sedan. 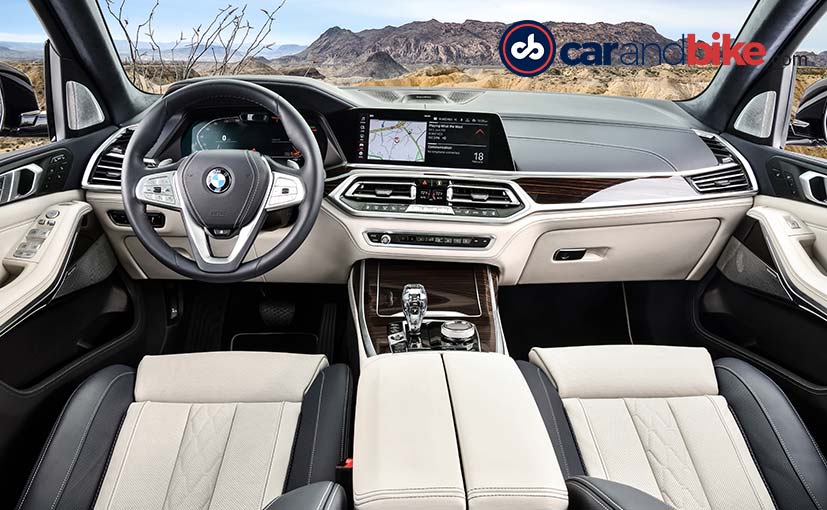 The BMW X7 gets the latest 12.3-inch digital instrument panel with an in-built head-up display

Both cars are loaded to the gills and you get all the bells and whistles you expect in a luxury flagship model of this class. The cabin is draped in 'A' grade leather and soft paddings and owners get plenty bespoke options to customize the colour options, detailing and inlays. They also get the new crystal gear knob which looks a little peculiar, but has a sense of novelty. Both models also get BMW's latest 12.3-inch digital instrument panel with in-built head-up display which debuted in the 8-Series coupe. The 12.3-inch infotainment display is also well-appointed and has phenomenal graphics and is coupled with Harman sound system. It is also connected to the latest iDrive system to display a range of infotainment, connectivity, climate control and driver assist features. Premium features such as gesture control, wireless charging, a plethora of ambient lighting options, in-built perfume, four-zone climate control, panoramic sunroof, powered and ventilated seats, massage seats, rear touchscreens, lane monitoring and self-leveling adaptive suspension among others are standard on both models. X7's humongous proportions also reflects inside the cabin and BMW has manged to space out three-row seating rather well on the inside, especially in the six-seater captain seat configuration which remains exclusive to this flagship model.

India is one of the focused markets for BMW and both models have been launched as part of its 12-model plan for our market. The Bavarian carmaker also gets the first mover advantage by introducing the latest generation of both models before its rivals which should help it meeting sales aspirations in our market. The 7 Series rivals the likes of the Mercedes-Benz S-Class, Jaguar XJ and the upcoming Audi A8L. The newly introduced X7 will be positioned above the X5 and will take on the likes of the Range Rover, Mercedes-Benz GLS (the next generation of which will arrive in 2020) and the Audi Q7 Facelift.