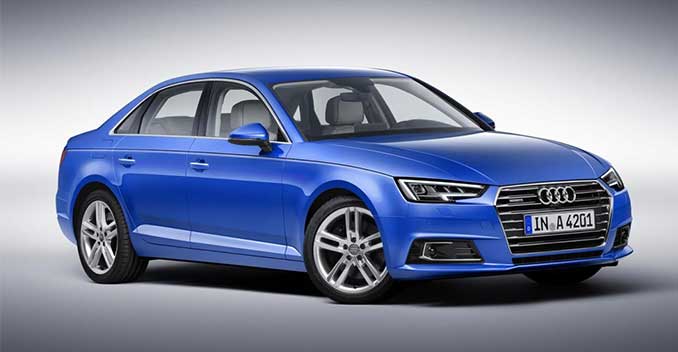 The new Audi A4 was unveiled in the presence of cricketer Virat Kohli and Bollywood star Alia Bhatt at the 2016 Delhi Auto Expo today and is set to be launched in India later this year.

The A4, which made its global debut at the 2015 Frankfurt Motor Show, looks a lot more compact and sharp when compared to the outgoing model. It features a wider single frame front grille and revamped headlights. There are new LED daytime running lamps, while the tail-lamps too have LEDs in them. The sedan has a more sloped roofline, while the car's rear and its wheel arches have been given a subtle redesign as well.

The Audi A4 is slightly bigger than its predecessor and is now 4730m long (25mm more), 1840mm wide, and 1430mm in height. The wheelbase of the car too has been stretched by 12mm to make it more spacious.

However, what Audi have managed to do is put the new A4 on a diet, which is why there is a considerable weight loss. According to the company, the A4 with the 1.4-litre TFSI engine has lost upto 120kg and now tips the scales at 1320Kg. The new sedan is also more aerodynamic with a drag coefficient of just 0.23.

Inside the cabin, the interiors get comprehensive changes with a new steering wheel and gear selector while the virtual cockpit from the Audi TT replaces the conventional unit.


0 Comments
The new A4 will be offered with petrol TSI and diesel TDI engine options, paired to an 8-speed automatic transmission. It will compete with the new BMW 3 Series, Mercedes C-Class as well as the Jaguar XE.