On the occasion of India's 73rd Independence Day, we take a look at some of the most well-known two-wheeler advertisements which make for some iconic moments in Indian automotive advertising. 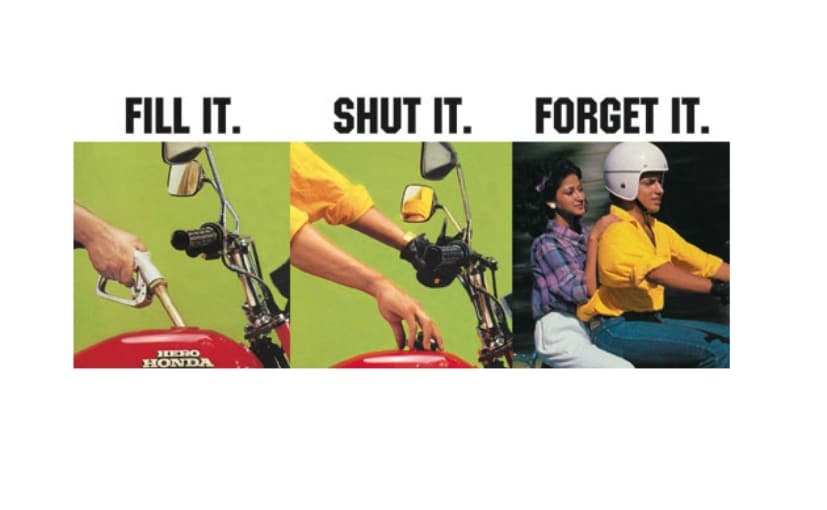 The Hero Honda CD100 from the 1980s with a four-stroke, 100 cc engine totally transformed the Indian motorcycle industry as we know it today, with a fuel efficient engine and frugal running costs. Along with the CD100, there have been several iconic motorcycles which have made significant contribution to India's motorcycle industry. The Bajaj Pulsar 150 and 180 twins established Bajaj as a manufacturer of only motorcycles, from being an everyday scooter brand of the "Hamara Bajaj" days. And in the last three decades, Royal Enfield has completely transformed from a niche cult brand to becoming a popular choice today, selling on an average, more than 60,000 motorcycles every month. But behind these brands are also some popular advertisement slogans and television commercials with a liberal dose of nostalgia from the Indian two-wheeler industry. Here's a look at some of the best two-wheeler ad slogans over the years.

"Suzuki Samurai - No Problem" - This popular television commercial shows a Suzuki Samurai motorcycle parked on a street. A man walks up to the bike and asks about its performance, fuel economy and so on, to a man, presumably, the owner, standing next to the bike. The man, understandably not very fluent in the English language, just replies "no problem" to each query. When the man asks if he can take the bike for a short test ride, the same answer is repeated, "No problem". It's only when the man rides away with the Suzuki Samurai that it's revealed that the owner is someone else. This catchy television commercial established the Suzuki Samurai name across India's drawing rooms, and not just among motorcycle enthusiasts. The Suzuki Samurai went on to become one of the largest selling motorcycles from TVS in the 1990s, and the commercial still retains its charm as ever.

3. Everybody Makes Way For The Bullet

Royal Enfield introduced a television commercial in 2004 for the Bullet Electra. The TVC shows a train running across a bridge and on the tracks while showing a rider on a Royal Enfield Bullet Electra cruising with the inimitable thump of the cast iron 350 cc engine. The train approaches a level crossing when the signal turns red. But in this case, it's the train which stops, letting the bike across, with a voice over with the punchline - "Everybody makes way for the Bullet!" The 2004 Royal Enfield Electra was one of the last models with the 350 cc cast iron engine, and right hand side gear shifter, before Royal Enfield introduced the left hand side gear shifter, first on the same engine, and then later on the new unit construction engine (UCE) which brought in an unprecedented level of popularity for Royal Enfield. This 2004 TVC underscores the Royal Enfield Electra as a motorcycle built for laid back cruising with the unmistakable thump, and a road presence.

When Bajaj launched the Pulsar series of motorcycles in the early 2000s, it followed with an advertisement campaign that established the Pulsar brand as a macho breed of motorcycles. The "Definitely Male" ad campaign may not be politically correct when it comes to gender parity, but it nevertheless established the Pulsar brand with a definitive macho appeal. The muscular and sculpted first-generation Pulsar motorcycles brought in a completely new design language in the Indian motorcycling scene. And the television commercial still remains memorable as the first advertisement which established Bajaj as a manufacture of high-quality, entry-level premium commuter naked bikes.

Before the advent of motorcycles, Bajaj was a household name as a manufacturer of scooters - with models like the Bajaj Super and Bajaj Chetak becoming immensely popular across the country in the late 1970s and 1980s. The "Hamara Bajaj" campaign played on the strength of the Bajaj Auto's nostalgic charm and accompanied with a melodic jingle and stunning visuals. The "Hamara Bajaj" campaign still remains one of the most memorable two-wheeler advertisement campaigns today.