The All-New Land Rover Defender has been taking the world by storm. The second generation Defender recently also made its debut in the United States - a whole 22 years after safety regulations had it go off the market in 1997. It appears that the Tata Motors owned Jaguar Land Rover has an imminent hit on its hands as the new car is creating a lot of buzz; and is already in high demand in markets the world over. And now we can confirm the car will come to India in June 2020. Hot on the heels of its market debut in the US, India too will get the Defender model line in the same order as America. Yes the Defender will arrive - first in its 110 or long wheelbase avatar.

The car is expected to drive in with just the P300 (2-litre, 4-cylinder, 296 bhp) Ingenium petrol engine. Auto transmission and AWD (all-wheel-drive) will be standard. Prices are expected to stay reasonably competitive - given that the car will be a direct import. Our sources have revealed that the car will be brought to market as a CBU (completely built unit) and will subsequently go for local assembly via the CKD (completely knocked down) kits route in late 2021. The Land Rover Defender 110 is expected to be priced between ? 80 and 97 lakh, while the First Edition (limited launch edition) will be priced over ? 1.05 crore. The Defender 90 is expected at between Rs 70 and 90 lakh. These are ex-showroom price bands of course.

The Defender will be available in 4 trims - the standard, Defender S, Defender SE and HSE. The higher two specs will get the bells and whistles like the ClearSight video-driven interior rear-view-mirror. Leather seats, the Meridian audio system, additional driver aids like blind spot warning, and a virtual instrument cluster.

But even the standard trim gets a fair amount - everything from the touchscreen infotainment (with Apple CarPlay/Android Auto), power adjust front seats to LED lighting. The DRL (daytime running light) signature though will only be on the SE and HSE. The lower trims will also not get the optional two-tone black roof.

For an extra cost, customers can also opt for some of the long list of accessories that Land Rover has developed for the Defender exclusively. Or they can simply go for the packs that the company has prepared - each giving the car a different character. You can choose the Urban Pack, Country Pack (ready for the slush and mud of country living), Adventure Pack (ideal for some basic off-roading), and the Explorer Pack (prepares the car for extreme off-roading capability). There is also a lot of gear and apparel to go with all of this - some of which is likely to be sold in India as well. We have reached out to Land Rover India to confirm these details, but have not heard back from the company.

The much speculated Defender 130 (8-seater luxury touring version) - if it comes, will not arrive before the second half of 2022. The Defender will be a luxury model given its pricing. But unlike the Discovery (family, utility usage), and the Range Rover Velar (lifestyle, luxury use), the Defender will be positioned for its mad off-road capability. It will go up against the legendary Jeep Wrangler and Mercedes-Benz G350d as its key rivals, besides other premium brand SUV offerings buyers would naturally consider. 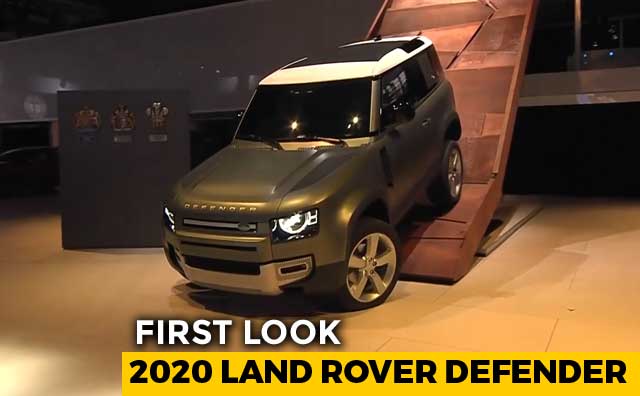