The Next-Generation Ford EcoSport subcompact SUV have leaked in Brazil. These are the first images of the upcoming third-gen EcoSport and the SUV has gone through some major cosmetic updates and it is also expected to get new, more modern features and equipment, along with updated powertrain options. The new-gen Ford EcoSport is expected to make its global debut in late 2020 or early 2021.

Visually, the new-gen Ford EcoSport now comes with a more SUV-ish look, unlike the crossover styling of the existing model. The SUV appears to have grown in size and proportions with curved edges and prominent character lines on the hood and profile. Upfront, we see a new hexagonal grille flanked by a pair of horizontal LED headlamps and sleek LED daytime running lamps connected by a chrome slat on the grille. The SUV now gets a more clamshell-style bonnet adding to its butch look, and a muscular front bumper with underbody cladding and bull-bar style design. We also see some chrome element around the projector foglamps.

The SUV also gets heavy cladding along the wheel arches and side-body, with a set of new alloy wheels. It also gets a sleeker greenhouse with black B-pillars and new sharper ORVMs with integrated turn signal lights. The rear section is all new with new LED taillamps connected by a black insert displaying the EcoSport lettering and the Ford logo above it. We also see a roof-mounted spoiler, shark-fin antenna, silver faux roof rail, and a plastic cladding rear bumper with a faux skid plate.

We do not get to see the interior in these images, but the new EcoSport is expected to get a more spacious cabin and new features. Under the hood, the India spec model is likely to come with the 1.5-litre petrol engine from the Dragon family with both manual and automatic transmission. It is too soon to comment on whether a diesel engine will be on offer or not. 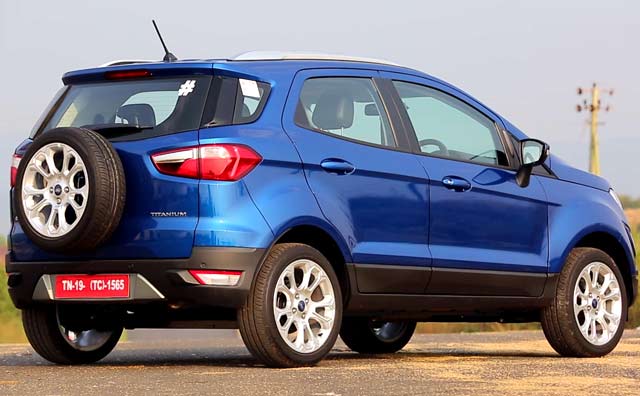 Ford Car Dealers in Other Cities